This commentary is by Don Turner, a former Republican state representative from Milton, former House minority leader, current Milton town manager and longtime member of the Milton Fire and Rescue departments. He was a candidate for lieutenant governor in 2018.

Workforce woes aren’t new to Vermont — but COVID-19 has made them worse. And our low unemployment rate doesn’t tell the whole story. There are nearly 25,000 fewer Vermonters in the workforce then there were just before COVID-19 hit. The number of unemployed Vermonters hasn’t changed — it’s that thousands of employed Vermonters have left the labor market altogether, despite near record wage growth.

Meanwhile, there are 23,000 open jobs at Vermont businesses according to the U.S. Department of Labor. So, in other words, there are roughly as many open jobs at mom and pop stores, larger companies, farms, and every other type of business in Vermont as there are people who dropped out of the labor force. 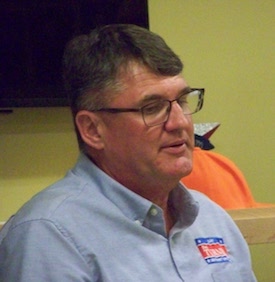 Something is drastically wrong with that picture.

In the wake of this crisis, Vermont has an opportunity to rebrand itself as a workforce destination. And while previous efforts to attract workers to our state with incentives are a great start, they don’t do enough to break down barriers to work for those Vermonters who have already left the workforce.

So, let’s give those Vermonters the tools to find meaningful work without the crushing hand of red tape getting in the way.

First, we should temporarily waive any and all occupational licensing fees for low income workers, young workers, veterans and service members (who relocate from state to state more frequently, requiring new licenses), those recovering from substance use disorder, those reentering the workforce after having been incarcerated, and those who were unemployed due to COVID-19. The last thing that the most vulnerable Vermonters need right now is more fees and surcharges to simply find a job.

Third, we should make it easier for those who recently moved to Vermont by recognizing their work experience. Many occupations might not have been regulated by another state, but are regulated by Vermont. So, for example, a new Vermonter could have worked for 20 years in an occupation that their old state didn’t license–but because Vermont does license it they, now have to go through all the hoops and red tape as if they’ve never done the job before. We should recognize these new Vermonters’ work experience and give them a leg up.

Fourth, let’s recognize that not all folks learn the same way. Some are better at learning through books and studying, while others prefer hands-on learning. Right now, Vermont’s occupational licensing laws only accommodate the first path. By allowing Vermonters who have completed a registered apprenticeship program to count their effort towards the educational requirements for their field, we can help Vermonters who prefer to learn on the job.

Finally, Vermont needs to continue to accept new Americans and press the Biden Administration to allow more refugee resettlement in our state. Our rich history of Italians and French Canadians immigrating to communities like Barre and St. Albans has formed the fabric of the cultural diversity that defines our state, and is echoed by contemporary resettlements in cities like Winooski. These new, prospective members of our workforce and communities are invaluable.

We’re at a crossroads as to whether we’ll continue to bury our heads in the sand and treat our demographic and workforce trends as fate, or whether we’ll do something about it. Let’s recognize that this is an issue that impacts all Vermonters, and put aside party lines to take meaningful steps to address our workforce shortage.