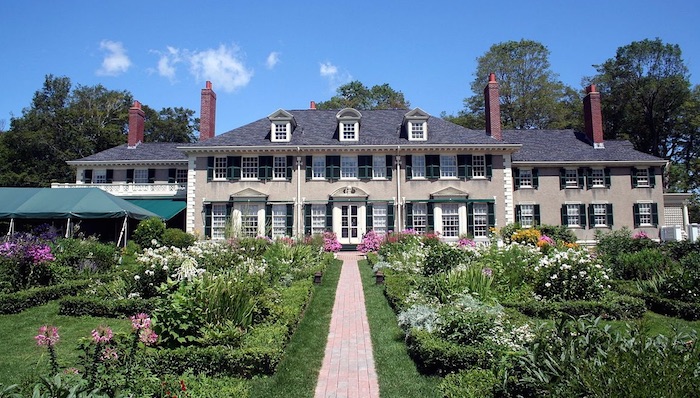 Hildene is the former summer home of Robert Todd Lincoln and his wife Mary Harlan Lincoln. It is located on Hildene Road in Manchester, Vermont.

Forty years ago, on July 27, in the wood-paneled dining room of Robert Todd Lincoln’s ancestral home Hildene, in Manchester, Vermont, a transaction of momentous significance took place. It was on that warm summer morning that a dozen or so Friends of Hildene volunteers surrounded the dining room table. They were observing Judge Arthur O’Dea, a Friends of Hildene attorney, turn over a check for $150,000, the balance of the $200,000 purchase price, to Robert Wade, a representative of The First Church of Christ, Scientist.

Hildene was no longer owned by the Christian Science church, but by a nonprofit organization, Friends of Hildene. And with less than a thousand dollars remaining in the organization’s checkbook, these hardy individuals assumed responsibility over 24 buildings, hundreds of pieces of furniture and equipment, and 412 acres of land.

From a financial prudence viewpoint, it was not a wise move to have taken over what had been conveyed to them by the church. Nevertheless, today Hildene is one of Vermont’s great cultural, educational, and environmental treasures. It is a place that thousands come to visit each year — not only for the home and restored Pullman Railcar, but also to see the goats, gardens and farm, as well as the maple syrup, cheese and honey operations. In addition, Hildene has become one of Vermont’s most spectacular wedding locations.

The success that exists today at Hildene was never in the minds of those who had gone through the struggle to save the historic home. It was nearly two years prior to the closing that the church had announced, “The First Church of Christ, Scientist has given local residents of Manchester, Vermont ninety days to come up with a plan to purchase Hildene before offering it to other buyers.” On July 29,1976, the announcement appeared on page one of the Wall Street Journal.

The significant and critical question for the founding trustees was this: How do we ever raise the asking price, $625,000? It might not seem like a lot of money today, but in the summer of 1976 it was an overwhelming amount to secure. What made fundraising more improbable was that the country was in the middle of a recession and oil crisis. Then, New York City asked Washington, D.C., and President Ford for help. Its request was rejected outright — Friends of Hildene, not unlike NYC, was on its own.

Vermont and local economies were in worse shape. The Equinox Hotel Resort and Spa was completely boarded up and would continue so for another nine years. The outlet stores were a dozen years away. Hildene had been wasting away ever since Peggy Lincoln Beckwith, the last Lincoln who lived there, passed away in July of 1975.

Negotiations with the church to have it reduce the price was the only way — meanwhile, the church had brought legal action in Vermont’s Superior Court to have the church relieved of the estate requirement to operate the property as a memorial to Robert Todd Lincoln and his decedents.

The leaders of the church came to the conclusion that Friends of Hildene was the only buyer and, ultimately, they had to work with them. Once they obtained the property, Friends of Hildene  were going to carry out the wishes of Peggy Lincoln Beckwith — something that was impracticable for the church to do.

How this small group of volunteers stuck together, facing almost insurmountable odds, defines the meaning of perseverance. Happy 40th Anniversary to today’s stewards of this Vermont treasure.

One thought on “Keelan: When perseverance prevailed”