One of the top Democratic candidates for governor this year won’t appear on the ballot when voters walk into booths for the primary this August — but he might just win anyway. 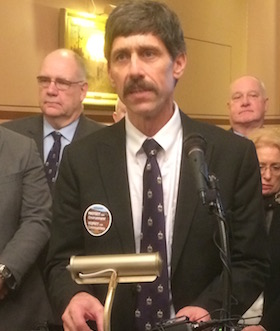 WRITE-IN: State Sen. John Rodgers, D-Essex-Orleans, has been recruited by voters who want a challenger to Gov. Phil Scott but don’t see a viable candidate in the current Democrat field.

The standard routine of announcing a candidacy and applying for a spot on the ballot wasn’t an ideal fit for write-in gubernatorial candidate Sen. John Rodgers, D-Essex-Orleans, who says he’s running his family business and can’t manage a costly, time-consuming campaign.

But Rodgers is no ordinary Democrat. He’s a pro-gun lawmaker who strongly opposed Gov. Phil Scott’s gun control push and also opposes Big Wind. Supporters across the state want him to challenge Scott so badly that they are working hard to push him over the top as a write-in.

“He’s a moderate Democrat — he’s one of the few left of what we used to call Blue Dog Democrats,” said Angelo Napolitano of Waitsfield, who helped kick-start the write-in campaign in May.

“There aren’t that many that are alive anymore, he’s one of the last. And the thing is, he knows what the rights of the people are. He isn’t the usual politician,” he added.

Rodgers is running against four other Democrats, all of whom will appear on the ballot during the Aug. 14 primary election: U.S. Navy veteran James Ehlers, dance festival director Brenda Siegel, former Vermont Electric Cooperative CEO Christine Hallquist and teenager Ethan Sonneborn. If Rodgers gets the most votes in what many expect will be a low-turnout election, he will become the Democratic challenger against Scott in November — a pro-gun Democrat versus a “gun grabbing” Republican.

As is true of any write-in candidate, Rodgers’ name will not appear on the party ballot. Those who intend to vote for him must write his name in on their ballots.

Richard Ley, a resident of Clarendon, also helped get the Rodgers campaign going. He said there’s not much choice left from either side of the political aisle.

“If we don’t get him on the ticket to run for governor, what choices do we have? We have nobody that really represents us well,” he said. “It’s almost a mandate, we need this to happen.”

In addition to supporting Vermont’s traditional gun freedom, Rodgers opposes industrial-scale wind turbines and the carbon tax. He says the time has come reevaluate Act 250, Vermont’s land use law, and he supports an audit of taxes and fees Vermonters face.

“Something that I’ve been focused on in the legislature is the rural economy,” Rodgers told True North in an interview. “The urban areas are booming, Chittenden County is booming, but the rural areas are still struggling and we really need to focus on how we improve the economy.”

Rodgers has supported legislation to protect forestry operations from nuisance lawsuits, and he also supports hemp legislation. “Our working landscape and tourism are two things that we really need to focus on,” he said.

“For somebody to come into the state and open a new business or new industry, it takes them years and years with all the regulation, and they get fed up and say ‘that’s it, we’re not moving here.’”

But Rodgers is also committed to his family’s construction business, and he’s helping his son with a hemp business as well.

“A bunch of people had been asking me to run, and I told them I would consider,” Rodgers said. “When it came down to getting close to time to getting petitions signed, I just looked at my schedule and my life and decided that a statewide campaign does not fit into my life right now.”

He said that as he explained his situation to his supporters, they doubled down in their resolve to make him governor.

“What happened was a bunch of guys … contacted me and they were disappointed that I wasn’t going to run, and they didn’t know what they were going to do,” Rodgers said. “Basically, they asked if it would be OK to write me in, and I said, ‘Well, I’m OK with that but it’s extremely difficult to pull off a write-in campaign,’ and they were just totally undeterred.”

Ley said he respects Rodgers even more for his dedication to his family commitments.

“He made commitments and he’s honored those commitments,” he said. “I really think he’s even more respected for doing that. The guy is good for his word, and what more could you ask for after what we just went through with Phil Scott.”

Rodgers said he will not be touring the state in a conventional campaign. However, he is willing to make public appearances for the public to ask questions. Ultimately, his grassroots supporters will be doing much of the work for his campaign.

“They think they can pull it off,” Rodgers said. “I told them my time situation, that I was not planning on raising money or spending money on campaigning for governor. I was focused on my Senate race and my business.

“And they said, ‘Well if you will let us use your name then we will do the work.’ So I told them to go ahead. I feel that people should have a choice, and if there are enough Vermonters that write me in and I get the nomination, then I would be happy to serve.”

Images courtesy of state of Vermont and Bruce Parker/TNR

23 thoughts on “Could pro-gun Democratic Sen. John Rodgers be Vermont’s next governor?”