Editor’s note: This commentary is by Deb Billado, chairwoman of the Vermont GOP

One year ago, President Donal Trump, Canadian Prime Minister Trudeau, and Mexican President Peña Nieto signed the United States – Mexico – Canada Agreement, known as the USMCA. This trade agreement would be one of the most significant trade deals in American history. It includes support for intellectual property innovators, increased market access for dairy farmers, incentives for manufacturing, protections for small businesses, and reduced red tape for producers and consumers alike. This trade deal is a win-win-win. 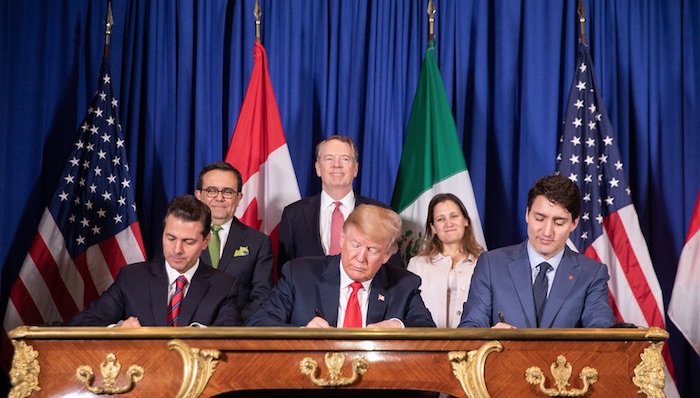 In fact, an independent panel found the agreement would add $68.2 billion to the U.S. economy, create 176,000 jobs, and boost dairy exports to Canada by $227 million. However, Congress has yet to vote on this truly important bill, with congressional Democrats delaying a vote repeatedly. In fact, the President of Mexico recently urged Speaker Pelosi to get the USMCA approved by Congress as soon as possible.

This trade agreement is vitally important to expanding Vermont’s economy as well. Vermont businesses currently export $1.3 billion to Canada and $43 million to Mexico each year. This includes over $200 million in agricultural exports, with 1,700 Vermont agricultural jobs dependent upon these key cross-border relationships.

Why is the USMCA not ratified by the Congress if this is such a great deal that will modernize crucial trade partnerships, support key economic sectors, and protect American producers while empowering consumers? The answer is obvious. The Democrats fear the re-election of President Trump and are willing to do or say anything to win the White House in the 2020 election. No matter the cost they are willing to go down any road to accomplish their goal of getting rid of our duly elected national leader. They will try to impeach knowing they have no chance of his removal from office and they will not ratify the USMCA because that will improve America’s economic situation and in so doing would strengthen President Trump’s chances in the upcoming election. Democrats care little that ratification of USMCA will be good for you and me. The only thing that matters is they defeat the president in 2020 and no cost of doing that is too high. Not only that, with the election a little more than 11 months away, they would be overjoyed if a recession would happen or the specter of one happening would be out there when people go to the polls next November.

6 thoughts on “Deb Billado: All believe the USMCA trade deal is great, so what’s the holdup?”