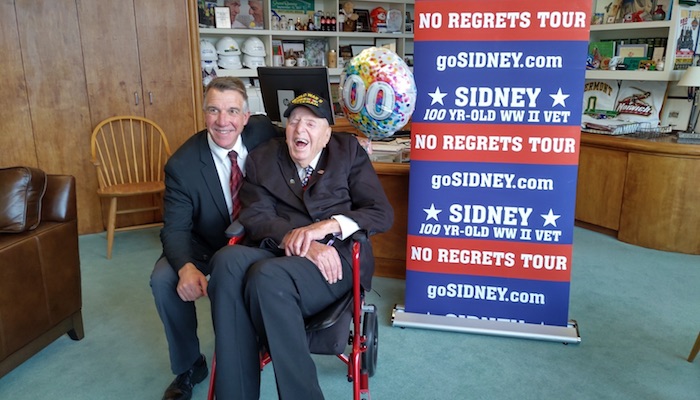 On Veteran’s Day we honor living veterans and remember the dead.

November 11 is a day to honor people like Sidney Walton, 100, who visited Vermont on his “No Regrets Tour” Nov. 5. He signed up to fight Hitler in 1941, before Pearl Harbor, and ended up being flown “over the hump” of the Himalayas as an army corporal in the Burma/India/China theater. He’s on a mission to meet every U.S. governor, which he was halfway to completing when he met Vermont Gov. Phil Scott.

Gov. Scott, son of WWII army soldier who lost his legs in combat, gave Sidney his own Vermont State Seal lapel pin — you can just about see it on Sidney’s coat. Afterwards Sidney celebrated with his family and members of the Montpelier Police Department at Capitol Plaza.

No more and no less, Veteran’s Day is also a day to remember the dead, including soldiers like Josh Palotta of Colchester. On the Josh Palotta Fund website, his mother Valerie describes what happened after Josh joined the Vermont National Guard in 2009 and was deployed to Afghanistan: “While my son was deployed they lost two of their brothers. Josh never really came home from that. He struggled with physical injuries (back issues due to being in mortars), and Post-Traumatic Stress (PTS). On September 23, 2014 he lost his battle with PTS and ended his life.”

Josh’s story does not end on that awful, tragic note. She continues:

Since then I have done a lot to raise awareness because I tell our story any chance I have the opportunity to. We are very open about how Josh died because we know we can’t help anybody else if we don’t tell our story. After Josh’s death, because of my work with Blue Star Mothers of Vermont, we started receiving a lot of donations. People wanted to do something to help. We were very thoughtful in what we wanted, what our Veterans needed. We talked to a lot of Veterans and from what we heard, we knew they really needed and wanted a place to just hang out and be with others who shared the same story.

So, we decided to develop Josh’s House VT which will be a wellness recreation center offering chiropractic care, massage, complementary and alternative healing modalities, a meditation room, a gym, video and game room, meeting and study rooms, a full kitchen for community dinners and cooking lessons, and more.

We won’t stop until there is an end to Veteran suicide. #ForJoshua

And when Mrs. Palotta says “we” she means it. All across Vermont veterans, friends and family members are doing inspiring things that promote individual healing and support the Josh Palotta Fund and similar efforts. See this excerpt from a story in the October 30, 2019 Journal-Opinion (community newspaper published in Bradford):

Earlier in the meeting, [Bradford select] board members said they supported a proposal by a Corinth man to statge a weekend running event on Wright’s Mountain in 2020. Jason Mosel said he would like to plan a two-day event featuring a 24-hour trail run and two shorter races as a fundraiser for the Josh Palotta Fund, a Colchester nonprofit that raises money for veterans and service members…..

Mosel said he is a veteran as well and has embraced fitness to help him endure his own struggles with PTSD and alcohol. ‘I run the trails all the time and I want to share them with anyone I can,’ he told members.

This weekend and on Monday, Vermonters will be going to see the new movie “Midway,” visiting graves and telling stories, and gratefully thanking veterans for their service. It might be a good time to peruse the Josh Palotta Fund website to learn more about how to give back to veterans who have already given far, far more than can ever be repaid.

3 thoughts on “Daily Chronicle: On Veterans Day, we honor Sidney Walton and Josh Palotta, and so many more”