One court already has temporarily halted the Biden administration’s vaccine mandate for private employers and legal battles are emerging across the nation as 27 states and multiple businesses and nonprofits sue to block the mandate on its likely path to the Supreme Court.

Plaintiffs have brought lawsuits in federal appeals courts for the 5th, 6th, 7th, 8th, and 11th circuits as well as the one in Washington, D.C. The next step will be a “lottery” process to determine which federal circuit hears the case.

Then, the federal government likely will file a motion to vacate the ruling Saturday by a three-judge panel of the 5th U.S. Circuit Court of Appeals imposing a temporary stay on enforcing the new federal rule implementing the mandate.

The Labor Department last week issued the emergency rule to require employers with 100 or more workers to get the COVID-19 vaccine, or get tested for the disease each week.

President Joe Biden has said that the Occupational Safety and Health Administration, part of the Labor Department, will start enforcing the mandate Jan. 4 through fines of $13,600 per violation per business. 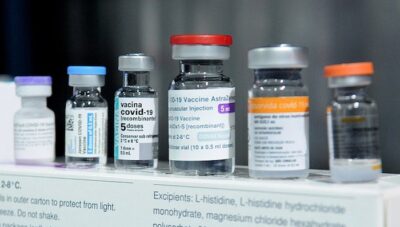 The mandate on businesses and other organizations is estimated to affect about 84 million American workers. Biden’s social spending bill, now before the House, calls for raising the penalty for a willful violation to $700,000.

In staying enforcement of the mandate while it is litigated, the three-judge panel of the New Orleans-based 5th Circuit asserted that the mandate raises “grave statutory and constitutional issues.” The appeals court will consider whether to impose an injunction.

The 5th Circuit sided with the Texas Public Policy Foundation, an Austin-based conservative think tank that filed the emergency motion to stay enforcement on behalf of a coalition of temporary staffing businesses in Texas.

The Texas Public Policy Foundation, like other plaintiffs, contends that Congress never gave OSHA authority to try to end pandemics or the power to regulate companies that work across state lines.

“The quick turnaround by the 5th Circuit to stay the mandate signifies the deep and obvious constitutional problems with the federal government’s private employer vaccine mandate,” the foundation’s general counsel, Robert Henneke, said in a written statement. “That should send a message to the White House that the mandate is not only ill-conceived but unconstitutional.”

Republican state attorneys general from Texas, Louisiana, Mississippi, South Carolina, and Utah also joined the 5th Circuit case, contending that the Occupational Health and Safety Administration has “limited power and specific responsibilities” and that the mandate is “flatly unconstitutional.”

The Republican National Committee sued Friday to block the mandate in the D.C. Circuit Court.

The most notable case, perhaps, is that of The Daily Wire, a Nashville-based news outlet founded by conservative commentator and author Ben Shapiro. The lawsuit was filed in the 6th U.S. Circuit Court.

In another case, Missouri Attorney General Eric Schmitt, a Republican, is leading a coalition of 11 states challenging the vaccine mandate in the 8th U.S. Circuit Court of Appeals. The motion, filed Friday, calls the mandate “unconstitutional, unlawful, and unwise.”

Iowa Attorney General Tom Miller, a Democrat, filed the lawsuit on behalf of the state and said it was his “duty, under the law, to prosecute or defend any actions” when requested to do so by Gov. Kim Reynolds, a Republican.

Alliance Defending Freedom also is involved in a case called Missouri v. OSHA, in which it represents Bishop O’Gorman Catholic Schools, a consolidated school system of eight schools in the Catholic Diocese of Sioux Falls, South Dakota, that sued over the mandate. The Christian Employers Alliance and the Home School Legal Defense Association both joined the case.

A seven-state coalition including Kentucky, West Virginia, Ohio, Idaho, Kansas, Oklahoma, and Tennessee filed a lawsuit to stop the vaccine mandate in the 6th U.S. Circuit Court of Appeals.

“Many Kentuckians are concerned by the overreach the Biden administration is displaying in issuing a federal vaccine mandate through OSHA, and our office is taking action on their behalf and on behalf of the Commonwealth,” Kentucky Attorney General Daniel Cameron said in a written statement. “The power to make these decisions belongs to the states, and the Biden administration cannot commandeer it to issue an over-broad and illegal mandate.”

Kansas Gov. Laura Kelly, a Democrat, asserted Friday of the vaccine mandate for private employers: “While I appreciate the intention to keep people safe, a goal I share, I don’t believe this directive is the correct, or the most effective, solution for Kansas.”

Indiana sued to stop the vaccine mandate in the 7th U.S. Circuit Court of Appeals.

In the case of Florida v. OSHA, Alabama and Georgia joined Florida in suing the Biden administration in the 11th Circuit. The case was brought by Cambridge Christian School in Tampa, Florida, which is represented by Alliance Defending Freedom. The King’s Academy, a Christian prep school in West Palm Beach, joined the lawsuit.

The Washington-based Job Creators Network, which advocates for small businesses, is suing on behalf of six companies in the 8th Circuit.

In Ohio, Buckeye Institute, a free market think tank, sued in the 6th Circuit on behalf of several companies, including Phillips Manufacturing.

Chicago-based Liberty Justice Center and the Pelican Institute for Public Policy, a think tank in New Orleans, sued in the 5th Circuit on behalf of a Louisiana business owner and a group of remote workers from Texas.

In the 7th Circuit, the Wisconsin Institute for Law and Liberty sued on behalf of two Wisconsin businesses to stop the OSHA mandate. The institute represents Tankcraft Corp., a metal fabricator specializing in products for the transportation market; and Plasticraft Corp., a custom molder of hollow plastic parts.

Supporters of the vaccine mandate for private employers contend that it is legal under the statutory language in the Occupational Safety and Health Act, enacted in 1970, as well as the commerce clause of the Constitution.

As previously reported by The Daily Signal, OSHA’s emergency temporary standards—the grounds for the mandate—requiring proof of “grave dangers” to employees have fared poorly in court cases since enactment of the 1970 law.

“Congress did not place vaccines within OSHA’s purview. OSHA is establishing the vaccine mandate through an ‘emergency temporary standard,’” Larkin and Badger wrote. “This highly unusual process allows OSHA to bypass public notice and comment. Federal agencies, including OSHA, typically must submit major rules to public scrutiny before finalizing them.”

Congress tasked the Department of Health and Human Services with determining the safety, efficacy, and appropriate use of vaccines. Congress authorized the Food and Drug Administration to determine whether vaccines should be allowed in interstate commerce. It empowered the Centers for Disease Control and Prevention to recommend who should receive such vaccines. …

If Congress meant to give an agency authority to issue a general vaccine mandate, it would have enacted a law conferring and defining that authority.

One thought on “What’s next as 27 states, multiple businesses sue to stop Biden’s vaccine mandate”