Editor’s note: This commentary is by Wendy Bucchieri of Arlington.

In April 2020, six weeks into closed schools and stringent Covid measures, I went to the Vermont Department of Health site. I downloaded The Weekly Flu Surveillance Report 2019-2020 Flu Season seen below. Dr. Anthony Fauci, director of the National Institute of Allergy and Infectious Diseases, said this lockdown was necessary to “flatten the curve” so that hospitals were not over- burdened. We dutifully did our part, but how would we know we had “flattened” the curve unless we compared other flu seasons to this flu season? My inquiring mind wanted to know. What I found on this chart is that we were actually below the peak of 2017-18 flu season and a bit above 2018-19’s flu season. Flu seasons run from September to May. 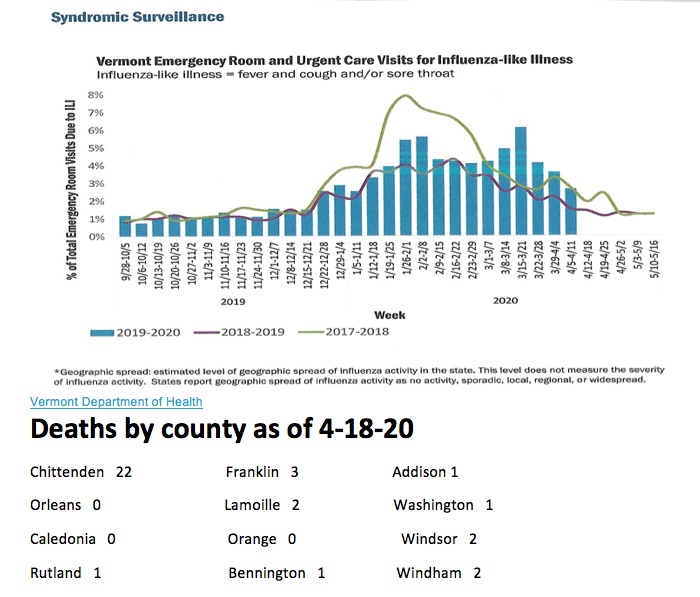 In August, after Gov. Phil Scott’s mask mandate, I went again to the website. I could no longer find the Weekly Flu Surveillance Report. It was gone, but they still had deaths by counties. As of Aug. 11, 2020, there had been 58 deaths due to Covid in Vermont. In actuality the 2019-2020 flu season was over. It had ended in mid-May, which would put death totals due to influenza/pneumonia below other years’ averages.

To put this in perspective, in 2017 there were 86 Vermont deaths due to influenza and pneumonia. Also, there were 134 drug overdose deaths, 112 suicides, 1,434 heart disease deaths, 1,332 cancer deaths, and 81 deaths from Parkinson’s disease.

The Vermont Department of Health site was now filled with Covid case numbers. We had an all-out, unprecedented testing effort. A changing of all health metrics were in play. Red Flags should be waving everywhere. Instead of death tallies the powers that be obfuscated the truth by switching to numbers of cases, which were magnified to create fear and then control. It was a brilliant plan, whoever devised it, because it worked.

Take note that as Fauci and others were hyping the “predicted” numbers, changing the metrics and saying we needed lockdowns, social distancing and mask wearing to “flatten the curve.” The reality is that the curve had not even reached 2017 Flu Season levels here in Vermont, and deaths from Covid, as of August 2020, were less than other years’ flu seasons.

A giant fraud and deception has been perpetrated. People have lost businesses, have been arrested for not complying, have grieved losses of loved ones alone, had religious and constitutional liberties violated, and had increases in depression, suicides, overdoses and weight gains. People were denied holidays with their families. And, if all this was not enough, a massive campaign against free speech took place on all Big Tech social media platforms to scrub any speech that did not adhere to the official narrative. Cancel culture at its finest.

While liquor stores were considered “essential,” support groups such as Alcoholics Anonymous and Narcotics Anonymous were not. If you had a plan to destroy our economy, our relationships, our psychological well-being and our freedom, it could not be tailored any better. Oh, and the things you cannot talk about? You can’t talk about masks inefficiencies against viruses, election integrity, inexpensive therapeutics that work against Covid and any other viral infections. You also can’t mention the conflicts of interest that Fauci, Bill Gates, the World Health Organization, Centers for Disease Control, and National Institutes of Health have with the promotion of Remdesivir and the vaccines. We can’t mention that the vaccines have not been thoroughly tested and are still in their clinical trials, of which the public are unwitting participants, and that these pharmaceutical companies have been given total immunity against any liability.

When all of this is said and done, we may find that more people died from the vaccines and the now-unknown medical consequences than ever died from the virus. I hope I am wrong. I ask God for mercy on all those trusting, frightened and job-threatened people who were vaccinated. And doctors are even vaccinating those who had Covid already. You should know better. Shame on you!

They will keep coming out with “variants” to tighten the noose around the neck of our freedoms until every last drop of free America is strangled out of us. It is time to wake up. It is time to stand up and stand against this deception. The only ones gaining in this “plandemic” are Big Pharma, complicit politicians, media outlets and big box stores — and let’s not forget those that sell medical supplies such as PCR tests, respirators and masks. Paying hospitals a lot of money when people were put on respirators may have increased death tolls. It is not time for our heads to be in the sand.

9 thoughts on “Wendy Bucchieri: Covid pandemic has been cloaked with much deception”