Rep. Peter Welch, D-Vt., issued a statement Thursday calling for the impeachment of President Donald Trump, even as the U.S. House of Representatives — including the majority of his Democrat colleagues — voted against the measure by a 332-95 vote on Wednesday.

Welch explained his reasons for breaking away from the mainstream of his party and going along with more radical colleagues like Rep. Alexandria Ocasio-Cortez, D-N.Y. 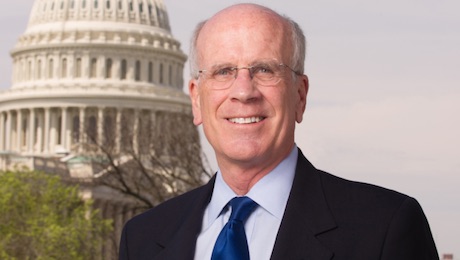 PART OF THE ‘SQUAD’?: Rep. Peter Welch, D-Vt., has been at the forefront of speaking out against President Donald Trump, often insinuating that he is a racist.

“I do not arrive at this conclusion lightly. The power of impeachment granted to Congress by our Founding Fathers should not be casually employed. In our democracy, every deference should be given to the outcome of every election,” he said.

“However, after 30 months in office, President Trump has established a clear pattern of willful disregard for our Constitution and its system of checks and balances. His presidency has wrought an unprecedented and unrelenting assault on the pillars and guardrails of our democracy, including the rule of law on which our country was founded.”

The vote came about through the leadership of Rep. Al Green, D-Texas, who submitted articles of impeachment on Wednesday, largely backed by four far-left Democrat congresswomen who have become known as “the Squad” — Alexandria Ocasio-Cortez of New York, Ilhan Omar of Minnesota, Ayanna Pressley of Massachusetts, and Rashida Tlaib of Michigan.

“It’s time for us to deal with his bigotry,” Green said Wednesday. “This president has demonstrated that he’s willing to yell ‘fire’ in a crowded theater, and we have seen what can happen to people when bigotry is allowed to have a free rein.”

The four congresswomen have gotten into a highly publicized war of words with the president, especially on immigration policy. The basis for the impeachment vote centered around statements made by the president amid the conflict.

The four representatives also were the only Democrats to vote against a funding bill to boost detention facilities at the border that have been highly understaffed and over-worked, even as far back as 2017 before the latest surge.

That vote prompted House Speaker Nancy Pelosi to denigrate the women as a product of “their Twitter world” without any other support in Congress. The conflict resulted in a split of support between the speaker and the Squad.

….and viciously telling the people of the United States, the greatest and most powerful Nation on earth, how our government is to be run. Why don’t they go back and help fix the totally broken and crime infested places from which they came. Then come back and show us how….

Welch was quick to come to the defense of the four congresswomen.

Tonight the House voted to condemn President Trump’s racist tweets. Attacking these four Members of Congress was dangerous, appalling and a complete repudiation of the best aspirations of the American people. #vtpoli https://t.co/c8VU9vzjzs

Amid the back-and-forth attacks, Trump’s base support has only strengthened, according to a national survey. Reuters reported that after the president told the four lawmakers on Twitter they should “go back and help fix the totally broken and crime-infested places from which they came,” his net approval among members of the Republican Party rose by 5 percentage points, to 72 percent.

Welch, who has aligned politically with Ocasio-Cortez on controversial measures such as the Green New Deal, continued to push the notion that the president is a racist in his letter on impeachment.

“Instead of embracing the fundamental responsibility of every American president to unite our country, this president has unleashed a torrent of attacks on fellow citizens based on their race, gender, religion, and ethnic origin,” he said.

On Tuesday Welch voted for a resolution that condemned the president’s online statements as racist. He also said Trump “made every effort to derail the Mueller investigation” into alleged Russian interference in the 2016 election. That investigation found no collusion between the Trump campaign and the Russian government.

Welch also said Trump “demeans, attacks and discredits the free press, dangerously labeling it as the enemy of the people.” The mainstream media holds just 6 percent trust with the public according to a recent poll of the American people.