The most damaging staple of the new left, formerly the liberal wing of the Democrat Party, is the reliance on identity politics to gain power and keep it. Until about 1980, “liberal” meant a belief in individual freedom, open mindedness and the elimination of policies and systems that prevented or restricted the ability of individuals to move freely in our society — to rise or fall according to one’s own abilities and merits. 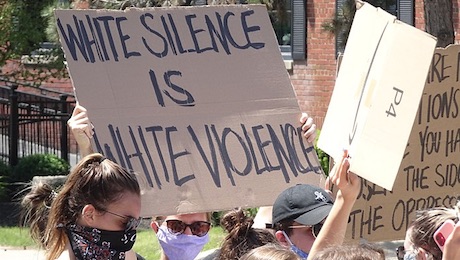 Identity politics abandons these ideals and demands that individuals be defined by their membership in a group, not by their own actions and desires. Today’s liberals seek the “Black vote,” the “Hispanic vote,” the “Jewish vote,” the “suburban vote,” etc., on the assumption that all persons in the group are identical. Members of any group who do not conform to the perception of the group as a whole are considered dangerous to the group and need to be exorcised. Independent thinking and non-conformity are disdained. So Tim Scott, the black Republican senator from South Carolina, is called an “Uncle Tom.” Mia Love, a black Republican Representative from Utah, was not invited to attend the Congressional Black Caucus. After one term she was successfully targeted for defeat and driven from office by a well funded Democrat campaign. Candidate Joe Biden summed it up perfectly: “If you don’t vote for me, you ain’t black enough.”

You need a lot of fingers to count the number of chiefs of police, mostly black and and female, who have been driven from office for attempting to enforce law and order in the face of the “peaceful” demonstrations that deteriorated into riots and looting festivals in city after city this year.

The supplemental tactic to the identity politics approach is the “identity slur” gambit. The idea here is to mock and denigrate those who oppose the new left wing as being inferior people who are not worthy of membership in the civil body politic. Candidate Barack Obama in 2008 set the tone for this when he said “the people who do not get what I am about are out there in the countryside clinging to their guns and their religion.” The message was clear: You scripture-reading, gun-toters have no place in my vision of America. This mentality hit a more dangerous level when candidate Hillary Clinton described her opponents as representing the
“deplorables” in our society. She then went on to define “deplorable” with a string of multi-syllable adjectives that she assumed we deplorables would not understand. This did not work out well for her. The deplorables realized that their interests were of no concern to this disdainful, patronizing, smug candidate and voted to send her home to Chappaqua.

The new version of the identity slur is a simplified version of the deplorable list. People who do not support the new left — Trump supporters or “all lives matter” people are described as being less intellectually advanced. Ergo, they must be anti-intellectual, simplistic thinkers with limited ability to understand the articulateness of their superiors. In other words, they are not really capable of being full partners in the social contract.

I propose an alternate thought: When you look and see someone who is self-reliant, capable of independent thinking and being judged as an individual instead of a faceless member of some group, your political choice is clear. But anyone who subscribes to the new left identity politics, identity slurs mentality should not be elected to office. Whether it be a city, county, state or federal office, vote them out and return our system to people who believe in it and will work to preserve it.