Chad Wolf, acting secretary of the Department of Homeland Security, said the ongoing protests in Portland are “the complete opposite” of peaceful demonstrations and that the federal government would “not retreat.”

“We support and we will protect those who want to peacefully protest,” Wolf said in a press conference Tuesday. “Unfortunately, what we’re seeing in Portland every night, roughly from midnight to 4:30 or 5 a.m. is the complete opposite.”

“If you’re a violent rioter or looking to inflict damage on property or law enforcement officers, you need to find another line of work,” Wolf said. “We will not retreat.”

The targets of the rioters include the Mark O. Hatfield U.S. Courthouse and the Multnomah County Justice Center. 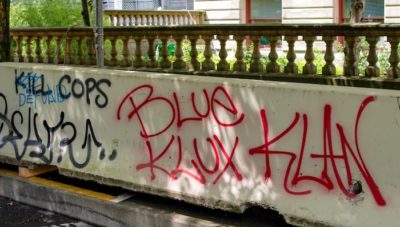 Violence began on May 29, days after the death of George Floyd, who died in police custody in Minneapolis.

Wolf said the city of Portland has turned a blind eye to crime that has been occurring throughout the city, which has continued since the reported dismantling of the cop-free zone during the first week of July.

“The city of Portland takes little to no action to stop or disperse this crowd,” Wolf said.

“These individuals carry lasers, baseball bats, explosive fireworks, metal pipes, glass bottles, accelerants, and other weapons, all targeting federal facilities and federal law enforcement. And yet the city of Portland takes little to no action.”

Wolf said the rioters are also destroying fencing and painting graffiti at the courthouse in Portland. He also said they have been taking plywood off the courthouse and setting it on fire, as well as tossing explosive materials into the courthouse.

He also decried the attacks against law enforcement in Portland as “disgusting.”

“Many of our law enforcement officers in Portland have other responsibilities around the country. They are away from their families and putting their lives at risk every night,” he said, adding:

The smear attacks leveled against our officers is disgusting. As it relates to CBP [U.S. Customs and Border Protection] officers deployed in Portland, these highly trained officers are in multi-camouflage wear because they work on the southwest border and they work in an environment that demands that that is their everyday uniform. And it is completely appropriate.

Wolf also pushed back on the notion that the federal government is to blame for the unrest in Portland.

“I’ve heard the mayor of Portland recently stated the federal government is to blame for this violence,” Wolf said, adding:

Portland has declared a riot on numerous occasions because of this nightly violence. While this action helps, unfortunately, they only take this action when city officials or local law enforcement are targeted, not federal.

Portland Mayor Ted Wheeler, a Democrat, told CNN Sunday, “The tactics that the Trump administration are using on the streets of Portland are abhorrent.”

“People are being literally scooped off the street into unmarked vans, rental cars, apparently,” Wheeler said. “They are being denied probable cause. And they are denied due process. They don’t even know who’s pulling them into the vans. The people aren’t identifying themselves. And, as far as I can see, this is completely unconstitutional.”

Previously this summer, another northwest city, Seattle, was an epicenter of violence and unrest following the death of Floyd on May 25. The Seattle area subsequently became home to the so-called Capitol Hill Autonomous Zone (CHAZ), also known as the Capitol Hill Organized Protest (CHOP), which was a self-declared “autonomous” and cop-free zone.

The city of Seattle ultimately took action and dispersed the participants at the beginning of July.

2 thoughts on “‘We will not retreat’: DHS’ Chad Wolf defends Portland intervention amid riots”