The classified material Hillary Clinton sent and received using an unsecure, private email server included correspondence with foreign leaders, according to documents obtained from the State Department by a government watchdog group.

Judicial Watch, which has called on Attorney General Jeff Sessions to order “an honest criminal investigation” of Clinton’s email practices while she was secretary of state, now awaits a federal judge’s Sept. 28 deadline for the State Department to finish sorting through the emails. 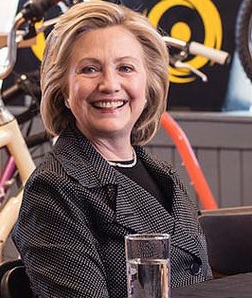 Comey, apparently without consulting then-Attorney General Loretta Lynch, told reporters in July 2016 that Clinton was careless in using her private email account for official business and transmitted classified information, but did not commit prosecutable offenses. President Donald Trump, who defeated Clinton in the November 2016 election, fired Comey in May 2017.

The FBI had uncovered 72,000 documents as part of its 2016 investigation into Clinton’s use of the private email server while serving as secretary of state under President Barack Obama from Jan. 21, 2009, to Jan. 31, 2013.

Judicial Watch, a Washington-based nonprofit that describes itself as promoting “integrity, transparency, and accountability in government,” last month released two new batches of Clinton emails (here and here) that it pried loose from the State Department.

Besides five instances of classified materials, the group said, the newly released Clinton emails contain messages about a meeting with billionaire financier George Soros and a memo to Clinton about a foreign government from a former top aide to her husband when he was president.

It is not clear whether State will meet that deadline.

In its FOIA request filed initially in March 2015, Judicial Watch sought all emails sent or received by Clinton in her official capacity as secretary of state, “as well as all emails by other State Department employees to Secretary Clinton regarding her non-‘state.gov’ email address.”

The tens of thousands of Clinton emails include messages sent to her by a longtime aide, Huma Abedin. The FBI found emails from Abedin on the laptop of her estranged husband, former Rep. Anthony Weiner, D-N.Y., prompting Comey to briefly reopen the FBI probe days before the election on Nov. 8, 2016.

One chain of emails from Abedin, with the subject “Invites for the week,” refers to a two-hour meeting in Southampton, New York, with Soros, founder and chairman of Open Society Foundations, a New York-based international institution known for financing progressive political causes.

The emails referring to Soros do not include dates, but Judicial Watch investigators deduced they were written before November 2011, and perhaps as long ago as early 2009, based on individuals involved in the exchange and the timing of certain events. It is not clear whether the meeting took place.

Five messages in the just-released batch of Clinton emails include classified material, according to Judicial Watch.

For example, on June 7, 2011, Clinton received classified information on her unsecure email account from former British Prime Minister Tony Blair with regard to Blair’s Middle East negotiations with Israel, the Palestinians, and the French. Blair also forwarded the information to Jack Sullivan, who was Clinton’s deputy chief of staff.

On Jan. 26, 2010, Sullivan sent classified information through his own unsecure BlackBerry to Abedin’s State Department email address, information that he previously sent to Clinton’s and Abedin’s unsecure @clintonemail.com accounts.

The email, classified as confidential, concerned negotiations between the United Kingdom and Northern Ireland and included a “call sheet” Clinton received before making a call to political leaders in Northern Ireland.

Redacted portions appear to have contained the names of members of the left-wing Irish political party Sinn Fein, according to Judicial Watch. The Sinn Fein members had been invited to a meeting, but its purpose is not clear.

Northern Ireland was also the subject of a June 13, 2009, email from Sullivan to Clinton that was classified as confidential and almost entirely redacted by the State Department.

As previously reported, Clinton also received emails from Sid Blumenthal, a confidant and former senior adviser to President Bill Clinton, her husband. The Obama administration had barred Blumenthal from serving in the State Department under Clinton.

Yet the email messages obtained by Judicial Watch show that Blumenthal advised Hillary Clinton on government policy. In an April 8, 2010, memo that included information classified as confidential, for example, Blumenthal encouraged her to develop relations with the new government in Kyrgyzstan.

Image courtesy of Alan Light/Flickr/CC BY 2.0