Business entrepreneur David Hall, a resident of Provo, Utah, offered to set up a business incubator at the Randolph campus of Vermont Technical College, but opposition from the community shut him down, and now financial troubles threaten to close the campus.

Hall’s proposals in the past few years were aimed at giving the campus a financial boost. The two projects ready to commit included a production facility for Hall’s company, Vanderhall Motor Works. The project was to be staffed by VTC students and would produce at least 1,000 sport-style, three-wheel electric cars per year.

The facility, initially proposed for Vermont, now has its home in Utah after Hall packed up and left under pressure from locals.

“It’s starting to take off pretty good,” Hall told True North in an interview. “We felt like Vermont would be a good place for that as well because it’s a really light commuter car. I was hoping just to forge some long-term relations with you know, small industry. I don’t like the great big giga-plants that are happening and I also don’t like the great big farms that are happening in the world.” 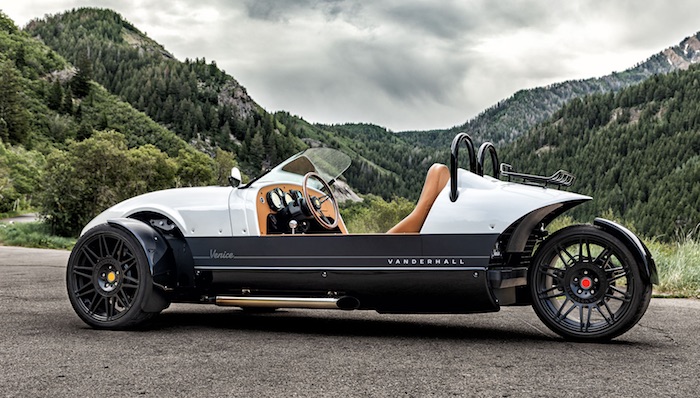 Vanderhall three-wheeled roadsters, like the one pictured here, feature a mono-aluminum chassis with up to a 1.5 liter, four-cylinder turbocharged engine and a six-speed transmission.

Hall says his offer would have helped the school.

“I think, primarily, what it would have done is provided a good job for students so they could learn,” he said. “What we were going to do was put the plant right there close to the campus, and then then the students would be able to learn on the job as well as at school.”

Former Vermont State Colleges Chancellor Jeb Spaulding called for the VSC trustees to vote to close Northern Vermont University campuses in Johnson and Lyndon, and to shut down the VTC Randolph campus. The state colleges system has encountered financial difficulties compounded by Gov. Phil Scott’s economic shutdown of the state.

Hall had another project idea for the school. He proposed vertical farms, which might be ideal for Vermont’s short growing season. In vertical farming, where crops are vertically stacked in layers, plants can be grown year-round.

“It’s really what Vermont needs because it’s got such a short season,” Hall said. “I felt like Vermont was perfect for that type because, you know, we can’t continue to just clear the land and the hills and use the old-fashioned approaches, because it pollutes the streams. So we’ve got to kind of go to a new-age type of agriculture.”

Hall said the economic fallout resulting from the shutdowns was probably too much for the school to overcome, but he still believes these two projects could have made a positive financial impact.

“It might have spawned some other companies that would have come,” he said. ” … In order to save the college, we would have had to have probably 10 or 15 companies move in.”

Asher Crispe, director of the nonprofit Vermont Future Now, has extensive knowledge about the vertical farms. He describes them as extremely efficient in terms of cost, acreage and labor.

“You produce so much more,” he said. “You stack trays of these things vertically so you can have [more]. For instance, AeroFarms has a 70,000-square foot facility in New Jersey that produces 2 million pounds of produce a year, which is like almost incomprehensible.”

Crispe said the overall production cost is about 25 to 30 percent less than conventional farming methods.

Crispe also said while mainstream EVs are currently reliant on government subsidies, major breakthroughs in the technologies are happening rapidly.

“It’s very much expected that we are approaching a tipping point where the trade-offs that currently sacrifice to have electric will basically disappear,” he said.

Crispe said the niche-markets that Hall is targeting are promising because of technological advances in manufacturing.

“You can now buy for a few thousand dollars an industrial-quality 3D scanner,” he said. “… You can map any object, including any part in a three-wheeler like that.”

Hall also expressed interest in “dense green housing,” low square footage homes meant to conserve land use. This project, which was not related to the school, garnered the most negative publicity for Hall among locals and media.

“I didn’t present it properly,” he said. “It’s quite dense, so it’s not traditional Vermont. My view is people should be together densely and then the rest is wilderness. That density drives Vermonters nuts.”

Hall also purchased  land in Vermont but is now selling it off.

“I’ve still got $3 million worth of property there so I’m still there a bit,” he said. “I had $6 million in property there but I sold about half of it.”

14 thoughts on “VTC Randolph campus may have missed business opportunity”