In recent weeks, several instances involving the reckless use of firearms dominated national headlines. In one case, a Georgia man tragically lost his life when armed civilians crossed the line between defensive necessity and vigilantism.

But such headlines tell only one side of the story. Every day, many law-abiding and responsible Americans use their firearms lawfully to defend their lives, liberty, and property.

In fact, as the Centers for Disease Control and Prevention concluded in 2013, almost every major study on the issue has found that Americans use their firearms in lawful self-defense between 500,000 and 3 million times a year. 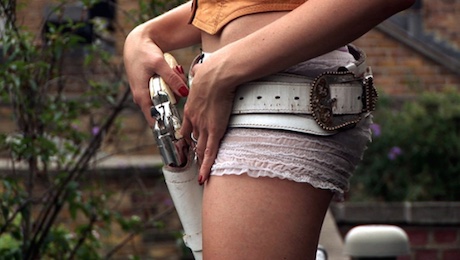 Women are the fastest-growing consumer segment in the hunting and shooting industry. One reason for the rise is the need for self-defense against criminals.

These instances of proper defensive gun use provide an important but often unreported counterbalance to the national conversation.

For this reason, The Daily Signal has been publishing a monthly series highlighting some of the news stories of defensive gun use that you may have missed—or that might not have made it to the national spotlight in the first place. (Read accounts from 2019 and 2020).

The lawful defensive uses of guns below represent only a small part of the many stories we found last month. You can explore more examples by using The Heritage Foundation’s Defensive Gun Use Database, an interactive map that allows users to find recent defensive gun uses from all over the country quickly and easily.

It’s true that gun owners sometimes overstep the lawful bounds of the Second Amendment, and the failure to act responsibly with firearms can have devastating consequences. But it’s equally true that, for countless Americans, the lawful defensive use of firearms has been the only thing standing between them and the devastating consequences of crime.

Whether it’s a woman rescuing her fiancé from certain death, or armed citizens unexpectedly helping to end a cross-county manhunt, it’s clear that the right to keep and bear arms plays a vital role in promoting public safety and protecting individual rights.