LUDLOW, Vt. — There are more than a few anxious parents in the Two Rivers Supervisory Union school district of Ludlow and Mount Holly as well Black River Union School District 39 this month. They await the looming district merger vote, scheduled for Nov. 28, that will determine the fate of a portion of the Two Rivers district as well as the high school.

Black River Union High School and Middle School has been a fixture in Ludlow since its creation out of the old Ludlow Academy in 1938. Now the school is faced with declining enrollment and high costs. 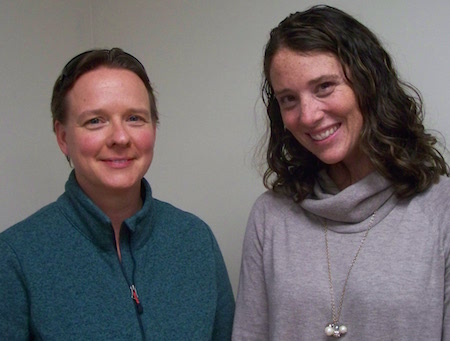 CHOICE ADVOCATES: Independent-school-minded parents Uli Donohue and Melissa Perrino are among the organizers of the Black River Independent School Committee.

The merger decision, which is mandated by Vermont’s Act 46 education governance law, lets district voters decide whether to merge. Choosing to become an independent school, another possible route, has its own set of pluses and minuses.

If voters approve a merger on Nov. 28, the state can offer numerous incentives and perks. A yes vote for the merger would see a cost savings of $600,000 in educational spending, with a 20-cent tax rate decrease in Ludlow and a 12-cent decrease in Mount Holly.

A no vote against a merger would mean no new school district would be created, but instead a detailed governance plan would be drafted and submitted to the Vermont Secretary of Education by the end of the year. Black River would remain open, at least for a few more years, with a move toward independence from Montpelier’s centralized control.

Earlier this year, a preliminary vote would have seen the closing of Black River Union Middle and High School. Instead, it gave it a temporary stay of execution to the school at least until the end of November.

In May, Ludlow voters voted “no” to closing their school and sending students to Mill River Union High School; voters in Mount Holly largely supported the closing. Mill River is located 21 miles away from Ludlow, north along state Route 103, in North Clarendon.

The fate of Black River is back in the hands of local voters once again on Nov. 28.

Now voters are returning to the polls, this time to decide about the creation of a pre-K-through-12 system called the Ludlow-Mount Holly Unified Union School District. The proposed district would be carved out of the current Two Rivers Supervisory Union, which serves the towns of Andover, Baltimore, Cavendish, Chester, Ludlow, Mount Holly and Plymouth.

According to Two Rivers Superintendent of Schools Meg Alison, the new Ludlow-Mount Holly Unified Union District would be responsible for the education of all students in the two towns from pre-K to 12th grade.

“Education would be provided by continuing to operate Ludlow Elementary School and the Mount Holly School for grades pre-K to grade six, and paying tuition to a school of each student’s choice in grades seven to 12,” she said. “Black River High School and Middle School would continue to operate until June 30, 2020, to prepare for the transition to school choice, but after that date it would cease to operate.”

While creating a new district as Alison described would seal the fate of Black River, some parents hope Black River will live on as a private high school, similar to its pre-1938 academy namesake.

Uli Donohue is a parent with a child enrolled in Ludlow Elementary School. She and another parent, Melissa Perrino of Ludlow, are among the organizers of the Black River Independent School Committee. The group contacted Rob Roper, president of the Ethan Allen Institute, for ideas about forming an independent Black River school.

“Right now Mount Holly and Ludlow operate elementary schools, but both towns send their middle- and high school-age students to Black River,” Donohue said. “Under the merger proposal the two elementary schools would remain open, but the middle and high school would ultimately close, and Ludlow and Mount Holly would become ‘choice towns’ for grades seven through 12 only.

“There would be a time window of about two years before closing the school. Our hope is that we can maintain a local school option, take the school that’s closing as a public school, but turn into a private school of grades seven through 12.”

Perrino, who is president of the Ludlow Elementary Parent-Teacher Group, said their mission is to keep a local middle and high school in the community in the form of an independent Black River Middle and High School while promoting school choice. “The idea is to ensure a smooth transition from public to independent school that minimizes disruption for students and staff alike and draw together the community,” she said. 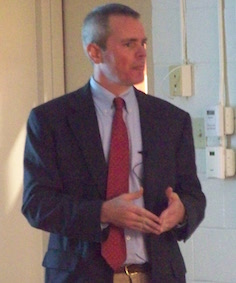 Rob Roper, president of the Ethan Allen Institute, advises school districts on how they can maintain or introduce school choice in their area of Vermont.

According to Roper, school choice is the way to go because it can lead to better academic outcomes. He spoke with Black River Independent School Committee members and other interested residents at a Nov. 14 meeting in the Ludlow Community Center.

He added that Vermont’s unique town tuitioning system has 93 “tuition towns” that allow for school choice in either elementary, middle or high school — or some combination of the three.

“Six percent of the k-12 student population receives tuition vouchers and approximately 4 percent use this choice to attend an independent school,” he said. “The rest choose to attend a government-run school.”

Roper encouraged the Ludlow parents and other residents to consider the independent school path. Using slides and data graphics, he explained material presented in the EAI published report, ” School Choice in Vermont: A 150-Year-Old System that Leads to a Brighter Future.”

“We  believe, and the evidence shows, that expanding Vermont’s publicly funded tuition model can be an effective way to lower costs, improve academic outcomes, achieve greater diversity in the classroom, and increase parental satisfaction with, and participation in, their children’s education,” Roper said. “… Tuitioning benefits the poor, those with special needs, and overall diversity.”

Roper said, however, that the path to creating an independent school has some political and financial drawbacks.

“An independent school can fail,” he said. “The school’s boiler blows up and then you have to pay for it yourself. There’s no (taxpayer) bailout. You could have corruption, embezzlement, and there’s no state bailout either. So there are pitfalls.”

“It’s very real,” he said. “Tom Martin of the Village School of North Bennington, which went independent in 2013, said that the state put them through the ringer. They can use all means, fair and unfair, to make sure the (choice) process fails. … It’s a challenge but it opens up a world of opportunity.”

While Roper, a resident of Stowe, is a cheerleader for independent schools, he counsels rather than pushes communities down the school choice path. He emphasized that opposition to school choice — that is, taking a school independent — often comes from professionals within the public school community itself.

“(In our case in Stowe), the superintendent and the chair of our school board were viscerally opposed to an independent school,” he said. “They see them as elitist. … But in fairness, independent schools, with kids with tuition vouchers, can accomplish many things.”

As an example, Roper cited the Compass School in Westminster.” Forty percent of the student population qualify for free lunch, 30 percent have identified special-learning needs, yet they have virtually 100 percent graduation rate and 90 percent of the graduates are accepted and go on to a college. It’s tremendous what you’re able to achieve when you have the creativity, the freedom to express.”

It’s hard to predict which way Ludlow and Mount Holly voters will go at the Nov. 28 election. Many residents are hesitant to talk publically about the vote, says Donohue, but she senses an interest to maintain Ludlow’s middle and high school independently.

“Voters may be scared by the amount of work that it would take to run an independent school here, but there’s real interest in doing so,” she said.

“Yes, there are many concerns on both sides, but this is what it means: Black River is not a sustainable school as a public school due to declining enrollment and the increasing cost of education. If we keep it open as a public school, the discussion will not end, we will be at this again and again. … (But) if we turn Black River into an independent school, its destiny is in the hands of the community, not the Vermont Agency of Education.”