Mail-in ballots are going to wrong mailboxes across the state, and the mixups are causing Vermonters to question Secretary of State Jim Condos’ decision to mail votable ballots to every registered voter ahead of the November general election.

Rick Lawrence, a resident of Morrisville, is one of many Vermonters who was surprised to get ballots in the mail in recent weeks that belong to other voters. On Facebook, he shared a photo of an extra live ballot that belongs to someone who has long since moved out of state.

The woman for whom the ballot was intended, Lawrence told True North in an interview, lived at the same townhouse but moved five years ago. When he attempted to contact her about the incident, he discovered she had moved to New Jersey, changed her address and registered to vote.

“If you think that every little town clerk in the state of Vermont is going to check every ballot and check every signature, I don’t believe that for a second,” Lawrence said. “I think there’s going to be a whole bunch of fraudulent [votes], and I am extremely concerned about the election. So now she can vote in Vermont and New Jersey, and she was very disturbed by this also.”

Lawrence said he worries about about “dead people voting” as well as “ballots mailed to people all over the country that shouldn’t have the extra ballots.” When he contacted his town clerk about the incident, he learned that voters have to alert the town when they move away to get off the voter checklist.

“According to [the Morrisville town clerk], the only way a person gets taken off the voting register in a town in Vermont is if they physically write a letter or an email to the town,” Lawrence said.

Another mail-in ballot mixup occurred over in Randolph. James Dwinell sent photos of the extra ballot to True North and said the person had not lived at the address for five years. 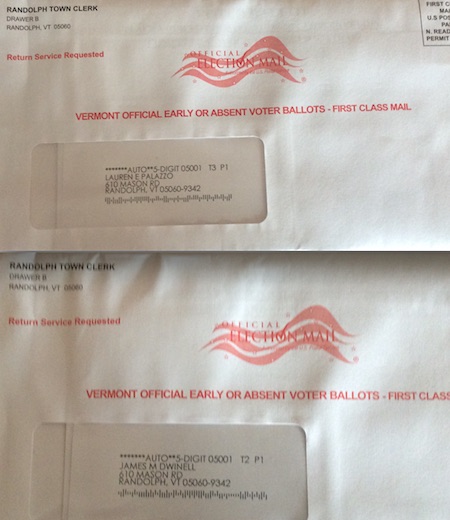 James Dwinell, of Randolph, received an extra ballot of someone he doesn’t know.

Dwinell said he has “no confidence in anything but polls and absentee ballots.”

“The instance in the North Carolina congressional seat in 2018, where a GOP operative harvested ballots in poor uninformed voter neighborhoods by the thousands to help the GOP candidate win, is the best recent example of an election going off the rails with mailed out ballots,” Dwinell told True North, referencing a recent high profile case of alleged voter fraud.

He said the way the Condos is implementing this change does not represent the will of the public.

“We are letting the media and Dems shove this down our throats without our elected representatives in Congress and the White House, or the legislature and the governor, being able to represent us,” he said. ” … [It is] amazing that we have fallen for all of this. It is like the frog and the pot of water; it’s now boiling and kissing our freedoms away.”

Todd Harrington, a resident of Essex Junction, knew something was wrong when he received multiple extra ballots at his address. He posted a photo on Facebook to let others see the wayward ballots.

“Two registered voters in my house and we get five ballots delivered to the door with different names and addresses. Two correct, three belonging to others! What idiot thinks our voting system is any good this way?” Harrington wrote as the caption to his photo.

President Donald Trump, a vocal critic of mail-in voting, recently highlighted seven examples of mail-in voter fraud and mistakes that have made headlines across the country. Examples include thousands of ballots getting discarded, ballots found in the trash, and ballots being counted a week after the election, among other mishaps.