The consensus among attendees: Officials need to balance the desire for more development with preserving the village’s historic character.

A first for Williston, the tour was a flagship event for planning officials in their efforts to spread awareness and gather public input on the proposed zoning updates, which aim to boost the number of people moving in and starting businesses in the village. 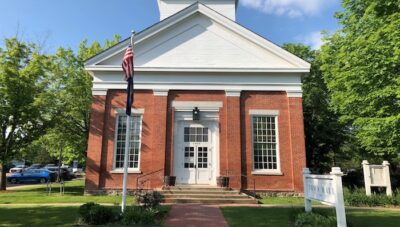 “I think what this is trying to do is to make it so people can afford to maintain their houses so that we get some more infill and maybe eventually have some new business,” said Williston Planning Commission Vice Chair Chapin Kaynor, who joined more than a dozen other residents as they set off from Town Hall around 5 p.m.

The tour was set in motion by the 2018 adoption of a new village master plan, an addition to the town’s 2016-2024 comprehensive plan, Heymann said.

“The master plan set goals for revising the zoning so the standards are clearer, easier for property owners to understand and for the boards and staff to administer,” she said.

Work on such homes is tightly regulated under current zoning standards — as a way to ensure historic preservation — but planners want to loosen the rules so that people can more easily roll out needed fixes.

“The current standards are discouraging that vibrancy,” Heymann said.

Heymann curated the tour so that each of its 12 stops would correspond to certain topics addressed by the proposed zoning updates.

The first three stops represented the largest areas of proposed regulation revision and prompted the most discussion from participants.

First, Heymann explained the difficulties owners of historic homes face with repairs or renovations at a stop centered on slate, windows and materials.

Current historic preservation guidelines require homeowners to respect the original character of a building. The town’s Historic and Architectural Advisory Committee ― which pre-approves applications for historic restoration before they reach official development review ― has often interpreted that verbiage as requiring homeowners to make repairs with original materials.

In the past, most appeals to the committee have been handled on a case-by-case basis, Heymann said, which can result in unequal treatment.

“It’s important for what it means to the property owners because updating homes and structures is expensive and takes investment,” she said.

One such homeowner, long-time village resident Carmyn Stanko, said she could not afford to replace her single-pane windows when needed because current historic preservation standards required her to use multi-pane wooden windows.

“I’m retired now, and I can no longer afford to maintain my home like I did when I was working,” Stanko said.

At a later stop, the group discussed how to update current residential density standards to allow for more development without disrupting the traditional character of the village.

That’s where the discussion got a little more lively.

The tour group seemed to agree that new homes are necessary to help sustain any businesses that could crop up under the proposed updates. But debate grew over how much infill should be allowed.

“I’m a proponent of infill,” he said. “We clearly need some more development in town or village centers.”

He added: “Unfortunately, with the mass influx of people into Chittenden County recently, we can’t keep the current density (limits).”

Heymann said she wants to work with residents and staff to find a happy medium between the two.

Stanko agreed that some infill could drum up business, but she is adamant about limiting development to preserve the village’s quaint aesthetic.

Stanko also believes any new residential developments in the village should be affordable.

At the next stop Heymann provided a physical example of what officials want to accomplish with zoning updates.

She demonstrated how the building that houses Ridgeline Real Estate Company has both residential and commercial uses.

She also pointed out the fence surrounding the parking lot tucked behind the building, which aims to minimize noise and nuisance for neighboring residences.

“When a (business), particularly a restaurant that might have outdoor music or seating, is developed, it will be the right size for the village and potential conflict will be mitigated as much as possible,” she said.

After the tour, Parisi said he had never experienced anything like it in his time as a developer.

“I think it’s a good way to get community members involved,” he said.

To give feedback on the proposed zoning changes, visit here.

Image courtesy of town of Williston