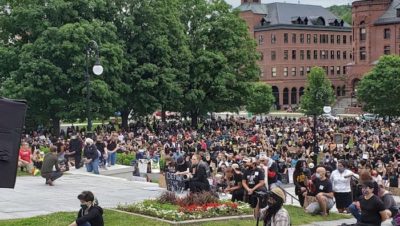 A large crowd gathers at the “Honour Their Names” event Sunday, June 7, on the lawn of the Vermont Statehouse.

The governor deferred to Schirling, who said: “I’m not aware of any scheduled protests in our service area. But when they do crop up we actively engage with organizers to ensure that things go smoothly and safely and that everyone can exercise their rights without running into any risks.”

“Peaceful protest is what we want to underscore,” Scott added. “We want to give individuals the right to exercise their freedom of speech but do it in a safe manner. If we hear about an organized protest, we’ll try to engage and make sure that  everyone stays safe.”

Drivers’ ed, road tests back on track – Vermont Daily also asked, “What is the status of students taking drivers ed in schools and taking road tests for their licenses?”

“I believe the schools have a backlog but they are addressing the issue, as schools have reopened,” Education Secretary Dan French said. After expressing some uncertainty, Scott said he doesn’t think there is a backlog for drivers’ testing at DMV. People must make appointments and reserve a slot for a road test.

School activity spigot opens – French also announced all schools will proceed this Saturday, September 26 to the more open  “Step 3” – meaning interscholastic sports resume, and cafeterias and other open spaces will be opened (but with restrictions).

A small number of new Covid cases were reported at three Vermont schools, including Williamstown. The good news is that “we have seen no Covid-19 transmission in schools,” Health Commissioner Mark Levine says. Contact tracing shows transmission occurred elsewhere and has not resulted in further transmission at school.

Statewide, Vermont has 1721 cases, with only 15 cases reported in the last four days. The death toll remains at 58, with none in the last 56 days.

CDC “public relations fiasco” – the U.S. Centers for Disease Control confusing decision to post and then later pull from its website a statement saying Covid-19 transmission is airborne shows why indoor distancing and masking are so important, Levine said. “We in Vermont will be guided by the science,” Levine said.

The CDC withdrew the purportedly “draft” statement and then clarified that the “main mode” of transmission is close person contact. Levine said the confusing “public relations fiasco” was an example of politicization at the CDC.