A young Essex Junction man and volunteer firefighter fired from his grocery store job for stopping a purse thief now has a new job, a GoFundMe site established by an admirer, the ongoing respect of friends and community, and the attention of local, national and international press.

Amir Shedyak, 20, wasn’t looking for any of those things when he arrived at work at Hannaford’s in the Lang Farm shopping center one day in August and was told by a fellow employee a woman’s purse had just been stolen. The young shift leader sprinted after the thief, stopped him, held him down, took back the purse, and waited for police to arrive.

His efforts led to the arrest of Adrian Moore, 29, of Essex on larceny charges, according to WCAX. Tragically, Moore died September 4 in South Burlington after crashing a stolen car, South Burlington police said. The accident scene showed evidence of an opioid addiction. 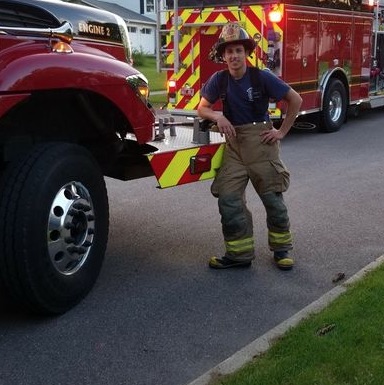 Amir Shedyak, as a volunteer fireman in 2018.

The Gofundme account was established by Kelly Kaye after she read a Sept. 19 articleabout Amir in the New York Post. “Asking for us to raise some money for this young man so that he can be rewarded for his bravery and for saving an old woman from more stress and potential ruin, identity theft or worse,” Kaye says. To date it has raised $120.

Shedyak will be the guest on the WVMT radio talk show Morning Drive with Kurt & Marcus 8 am Friday morning, according to Shedyak’s Facebook page. The story also has gone national and indeed international, through publication in the Sun, a United Kingdom sister Murdoch publication of the New York Post.

“This is so much bigger than company policy. It is right vs. wrong in our own backyard. Everyone should contact Hannaford’s & let their feelings known. We need more Amirs.” – Joe Carnacchia, Essex Junction

“Thank you for your service to your community and for taking action to love your neighbors, Amir Shedyak. You are a true hero and acting with integrity in a way that most of us only post about to further our political agenda-and usually rather hypocritical to our professed beliefs. You are the employee, neighbor, and friend I aspire to be.” – Derek Cook

“This young man is a hero, problem today is we fire people who try to help others with no agenda.” – Michelle Thibault, Essex business owner

“You should have received a raise and promotion. Please don’t change you’re a great person. Your former employer will be hearing from me and all of my friends. God Bless you.” – New Yorker Derek Timoney

Attention to Shedyak’s predicament began after he posted the following letter on social media. It was then reposted by friends and brought to the attention of local media.

“I got fired from Hannafords after working there for four years.

“I started out as a bagger and worked my way up to the post of a shift leader. Throughout the years working at Hannafords, I was trained in many departments such as the kitchen, deli and Hannaford to go. I was March employee of the month for coming to work on time, covering shifts when needed, and going above and beyond to help customers in any way possible.

“I had just arrived into work as usual, I clocked in and went on with my day. I was flagged down by an associate and asked what was wrong, he said an elderly lady’s purse had been stolen. I quickly sprung into action and ran outside.There were many people outside due to witnessing the act of crime. I asked which way the thief went and chased after him.

“I was able to subdue him and get the purse back to the elderly lady. She was beyond grateful! A few days later I went back to work like usual, except this time I got called into my managers office. I was told that I would be suspended due to an ongoing investigation of the incident. A week later I received a phone call that the investigation was done and I could come into work for the results. The outcome resulted in me getting fired due to safety issues while on company time. I have no hard feelings towards my coworkers/ managers or the establishment.

“I just feel that what I had done was not wrong and should not have resulted in me being fired.