Under the Global Warming Solutions Act, Vermont looks to continue its crusade to end climate change. But such weapons are far more likely to be turned on Vermonters than to actually impact the climate.

On Wednesday, Jan. 29, the House Judiciary Committee asked for advice about the Global Warming Solutions Act from Robert McDougall and Laura Murphy, who work under Vermont Attorney General TJ Donovan.

One of the most insightful observations about the GWSA came from Rep. Matthew Trieber (D-Rockingham): “This is one of the most broad pieces of legislation I’ve ever seen. And I say that as someone who signed to the bill. I’m having a hard time seeing how someone wouldn’t be injured.” Kudos to Triber for being willing to critique a bill that has his name on it. 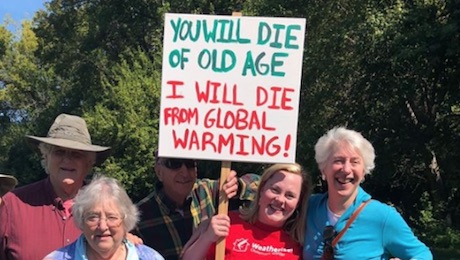 Amid plenty of smiles, members of the Vermont Climate Caucus hold a sign suggesting future mass deaths will occur due to “global warming.”

Let’s go down that rabbit hole for a moment. The GWSA is broad in the sense of transferring law-making authority from the Legislature to the executive bureaucracy and the judiciary. The only limit to this transferred authority must be found under a GWSA “legally enforceable system by which Vermont will reduce its statewide greenhouse gas emissions.”

And this “limit,” is really no limit at all.

After all, can we identify any Vermonters who aren’t being “injured” by climate change? As Rep. Trieber admits, the state would “have a hard time” showing there is no “injury” to a Vermonter grappling with the many environmental and economic downturns we can blame climate change for.

Such being the case, anyone who sues the state will have every reason to suspect they will be successful. That is, in recovering their attorney’s fees in order to get the state to achieve Vermont’s stated goal of 80-95% reduction from 1990 greenhouse gas levels by 2050.

We are being led to believe that reducing Vermont’s carbon emissions must be accomplished at all costs. This is the supposedly sensible limit to the ambition of the climate lobby and their legislators. For sake of argument, let’s say we get that 80-95%. To be generous, let’s grant that Vermont achieves net zero carbon emissions by 2050.

And yet, will Vermonters be shielded from the consequences of the supposed “injury” once we reach net zero? For two reasons, the answer is a definitive no.

First, if we accept the linkage between carbon emissions and climate change, collective action still remains a problem. All 200-plus countries in the world produce some level of carbon emissions. Even if a majority of countries to reduce their emissions, Vermonters would still suffer the consequences of climate change regardless of what Vermont’s Legislature does with our 0.1% share of emissions. Who gets elected president won’t change that. And yet, if these countries do not act, Vermont’s government and by extension, the taxpayers, will be liable for whatever attorneys fees a judge thinks are appropriate under the GWSA.

Second, net zero in 2050 will not be enough. Vermont has put thousands of pounds of carbon emissions into the atmosphere during the past couple centuries. It would become our mission to “draw down” those emissions using mandates for planting vegetation and engineering soil that will suck our “debt of past emissions” from the atmosphere. Such measures have been discussed at the Legislature in recent years.

The Global Warming Solutions Act is a draconian anti-democratic piece of legislation. And yet, even such a drastic measure will not begin to remove the “injury” which can be used to justify suing the state under the GWSA. Is Vermont ready to mortgage our economic future on a climate crusade, when the goal we aim to achieve is something almost completely beyond Vermont’s control, especially when such bills subvert the representative democratic process?

6 thoughts on “Flemming: Vermont’s climate crusade is futile with or without GWSA”