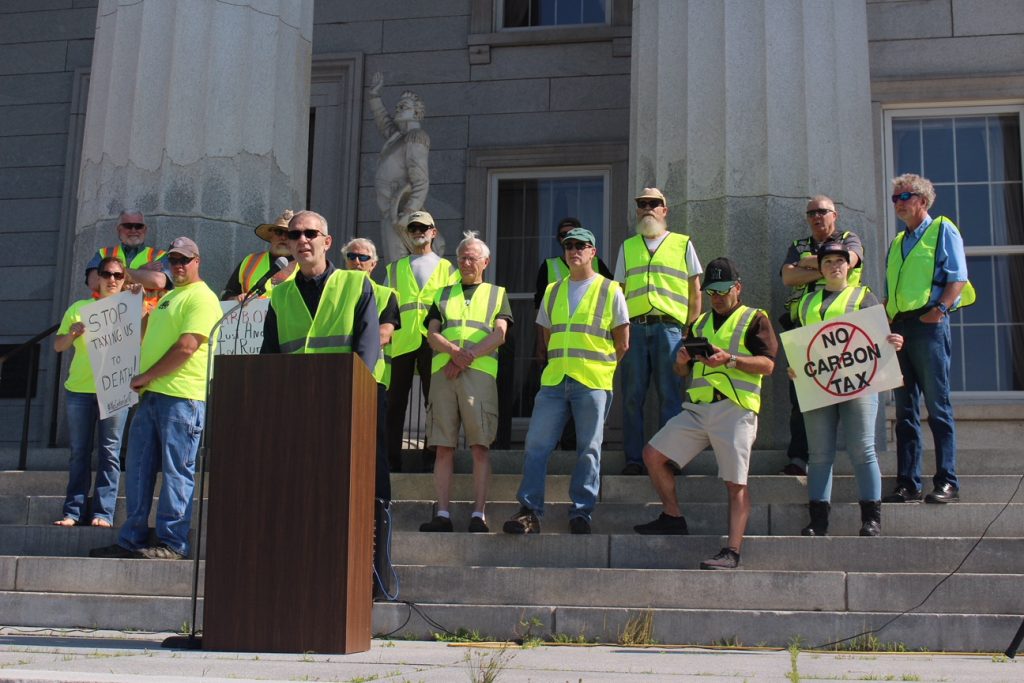 NO NEW TAXES: Anti-carbon-tax activists gathered at the Statehouse on Sunday morning to express their views on why such a policy could be harmful to Vermont.

MONTPELIER — The next Statehouse session is half a year away, but Vermonters who oppose a carbon tax staged a protest Sunday to tell lawmakers in advance they are ready to fight carbon tax legislation.

J.T. Dodge of Newbury, one of the organizers of the event, told reporters that taxing gasoline won’t be productive when many Vermonters already carpool to work in an effort to save money on transportation costs.

“Many of them do because they are not making enough money at their jobs to actually pay for the gas themselves. That’s the way it is right now,” he said. “If we raise the price right now, that’s just going to make it harder.”

He said it’s not just the carbon tax that Vermonters need to look out for — lawmakers have other initiatives to shift Vermonters away from carbon-based fuels and to restrict overall fuel consumption. As examples, he cited renewable energy portfolio standards and vehicle emission standards.

“And look what we are doing with vehicle inspections; we are making them tighter on people. That’s not going to make the struggling rural population have an easier time,” he said.

There were a handful of speakers who took to the podium for the event, including Edward Gilbert from Graniteville.

“The moment that Vermont Yankee went down, even though we’re the smallest carbon-footprint state in the country, we saw a small rise [in carbon output],” he said.

While it was active, the Vermont Yankee nuclear plant in Vernon put out 600 megawatts of carbon-free power before it was shut down due to pressure from environmentalist activists. By comparison, 16 industrial-scale wind turbines for Sheffield Wind produce just 40 megawatts.

Everett Fryman of Morristown spoke at length about the problems with electric cars, which cost $30,000 and higher even after federal subsidies of $7,500 per car. Fryman said using rare-earth metals to produce batteries for electric vehicles has its own problems.

“This cost is nothing less than the enslavement of minor-children to both extract and recycle what are called rare-earth heavy metals, which are essential to manufacturing a rechargeable batteries, the critical component in those types of vehicles,” he said.

He explained that the most essential type of rare-earth metals for these batteries typically come from the the Democratic-Republic of Congo in Africa, an unstable economy where young children work in the mines earning only pennies per hour.

Archie Flower of New Haven was the next speaker. He said it is not the proper role of government to regulate CO2.

Deserae Morin, a former GOP House candidate from Colchester, also spoke at the event. She emphasized the importance of maintaining a free market.

“What we need is a political, social, economic environment that allows and encourages the development of these technologies instead of constantly being crushed under the foot of taxation,” she said.

Other protesters said a carbon tax hasn’t worked in Germany, and that Vermont’s total carbon output is small relative to the nation and world. However, a carbon tax would have a direct impact on residents of the state.

“Humankind has never considered, planned or executed an intentional change in the earth’s climate as VPIRG suggests Vermont can do,” Dodge said. “Humankind has zero experience or the metrics to measure the effects of our actions, whether positive or negative, Vermont can only further deplete its resources by embracing the carbon tax and its schemes.”

6 thoughts on “Vermonters protest carbon tax at the Statehouse”