Editor’s note: This commentary is by Suzanna Jones of Walden, Vermont.

Vermont has a reputation for producing sturdy New England farm folk — hardscrabble people who lived full lives under challenging conditions. Our neighbors, Frank and Virginia, were prime examples. Living well into their 80s, they never owned a car or a phone, and never went on a vacation. They saved and reused everything, and grew their own food. Despite — or probably because of — the simplicity of their lives, they were happy.

Now there is a different kind of folk in the Green Mountain landscape. You’ll find them rushing to the airport in their hybrid car, smartphone glued to their hands, trying to catch a plane for their vacation abroad. Often well-meaning and “progressive,” they tend to look down on people like Frank and Virginia for not being “green” enough. The reality, of course, is that these self-described environmentalists have a far greater impact on the Earth than those older Vermonters did. 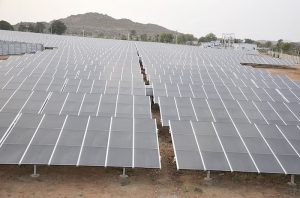 “But solar is much more than just glass. One example? Like wind power, it requires the environmentally devastating — and fossil-fuel based — mining of rare earth metals.”

Mainstream notions of monetary and career “success” lead us to dismiss simpler ways of life. Unfortunately, this leaves us utterly wedded to the economic system that lies behind all our environmental problems, including climate change.

Bill McKibben’s recent appearance in Hardwick to promote his new book, “Falter,” got me thinking about this. Back in 2008 McKibben correctly identified our growth-obsessed economy as the source of the ecological collapse we face today, explaining that when the economy grows larger than necessary to meet our basic needs, its social and environmental costs outweigh any benefits. He pointed out that our consumerist way of life — in which we strive for more no matter how much we already have — is one of the ways corporations keep our bloated economy growing. The irony, he added, is that perennial accumulation does not even make us happy. But now, sadly, McKibben studiously avoids criticizing the very economy he once fingered as the source of our environmental crisis.

During his talk he referred to Exxon’s “big lie”: The company knew about climate change long ago but hid the truth. Ironically, McKibben’s presentation did something similar by hiding the fact that his only “solution” to climate change – the rapid transition from fossil fuels to industrial renewables — actually causes astounding environmental damage. Solar power, he said, is “just glass angled at the sun, and out the back comes “modernity.” But solar is much more than just glass. One example? Like wind power, it requires the environmentally devastating — and fossil-fuel based — mining of rare earth metals. And the “modernity” coming out the back? That is the lifestyle that is killing the planet.

McKibben extolled the virtues of Green Mountain Power’s industrial “renewable” developments, failing to mention that GMP sells the renewable energy credits from those projects to out-of-state utilities, thereby subsidizing the production of dirty energy elsewhere. He also neglected to say that one of GMP’s parent companies is tar sands giant Enbridge, which owns a $1.5 billion stake in the Dakota Access Pipeline and is currently working to use Vermont as a corridor for future fracked-gas transport.

McKibben once claimed that “every turn of the blade” of an industrial wind turbine “reduces fossil fuel consumption somewhere.” When the renewable energy credits are sold, however, this is simply untrue. And while the production and installation of every turbine has serious environmental costs, every reduction in consumption really does reduce fossil fuel use somewhere, while simultaneously reducing environmental impacts of all sorts.

Renewables only make sense in tandem with drastic reductions in energy consumption, and are best implemented through small-scale, grid-free efforts. But what we have instead is the continued corporate marketing of a psychotic American dream — now powered by “renewables.” This co-opted response to climate change is not about protecting nature from the ever-expanding human nightmare, it is about sustaining the comforts and luxuries to which we feel entitled. It is business-as-usual disguised as concern for the Earth. It is utterly empty, but it serves the destructive economy.

Though not McKibben’s intent, this is what he implicitly supports.

Climate change is a crisis, but it is only one of many ways the planet is being destroyed. Changing the fuel that runs the system that is killing the planet is not a solution. An effective response would involve shifting towards the way Frank and Virginia lived. It won’t look cool, or stroke the attention-seeking narcissism of social media addicts, but it would have immediate benefits.

That shift will require a major rethinking of our lives and economy; it asks us to have the maturity, courage, humility and wisdom to put nature and her needs first. McKibben deserves credit for sounding the alarm about climate change early on, but now he should tell people the unvarnished truth: that if we cannot sacrifice our comforts, luxuries and rapid mobility because we love this Earth, then there really is no hope.