GAINING MOMENTUM: Gatherings at Constitution-themed rallies continue to take place across the state. This event attracted liberty minded Vermonters on Aug. 21, 2021, in front of the Vermont Statehouse.

MONTPELIER — At least 100 liberty-minded Vermonters gathered Saturday at the Statehouse to hear speakers discuss hot-button topics ranging from media censorship and excessive COVID mandates to the lack of police support in Burlington.

Former Manchester chief of police Michael Hall, the first speaker at the event, discussed the crime wave taking place in Burlington as that city’s police department continues to operate with only two-thirds of the officers needed to keep local residents safe.

“You have a bunch of loons running your city,” Hall said. “You have people up there who don’t care about your safety. Burlington is a shooting gallery. Don’t believe me, just turn on Channel 3 News any night of the week.”

Recent reported crimes in Burlington include at least one “shoot-out” and a couple of other incidents believed to involve gunfire, including one gun incident reported Saturday morning. Late night burglaries and attempted burglaries were reported Thursday.

Hall noted that voters who elected an anti-police candidate to fill the Ward-3 City Council seat in Burlington last Tuesday represent just a small percentage of the local population. 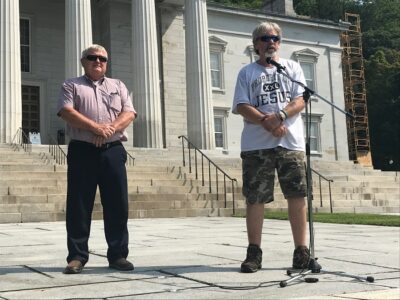 “The choice between the candidates was a gentleman who was pro-law enforcement and pro-law and order and civilized society, versus the guy that just wants to abolish the police,” he said. “Well, in Ward 3 they have about 4,000 people — 22 percent of the population showed up to vote. And guess who got elected? The guy that wants to abolish the police.”

The next speaker was Michael Desautels, the print shop owner in Newport who earlier this year lost a legal battle against the governor and attorney general over the state’s mask mandate.

“Whether I adhered to the mask mandate is irrelevant — I am entitled to a fair trial,” he said. “My quest to find a lawyer provided difficult as many felt intimidated by the state. I was personally threatened a few days after being served by Attorney General TJ Donovan. Donovan has called me informing me that he had investigated me. … A threat tactic nonetheless.”

Desautels said he has lost much of his family’s income due to opposing the mask mandate. He hopes Vermonters who hear his story will use it to fight for their own freedoms.

“My livelihood is being brushed off,” he said. “Our system has failed us, it has failed us big time. I am turning to you to get my story out, [hoping] that in some small way it may help Vermonters keep our freedom.”

Maggie Karrin, of Vermont Right to Life, reminded the rally-goers that proposed state constitutional amendment Proposal 5 would create a constitutional right to unrestricted abortions for all nine months of pregnancy.

“According to proponents and the majority of your legislators, Proposal 5 recognized this undefined promise of reproductive liberty as a Vermont value, yet opponents like Vermont Right to Life know that this language was created purposely vague and deceitful. There is no clear definition in its language, as was addressed repeatedly in legislative committee meetings. Proposal 5 doesn’t even mention abortion.”

The fourth speaker was Amy Hornbias, a former Vermont educator who became discouraged and quit her work once COVID lockdowns and mask mandates for children went into effect. She now visits school boards around the state to share her research, and said hospitals in the past have used masking mandates to attempt to coerce vaccination.

“The research was that masks have been used as coercion in health care settings to convince health care workers to get the flu vaccines every year. And now we’ve moved this coercion technique to the public,” she said.

She introduced The Vermont Mask Survey, a compilation materials concerned parents can use while engaging with school boards. She added that Vermont continues to push masks on young children even as mask brands place disclaimers on their packaging saying masks do not protect against the coronavirus. One such disclaimer reads: “Masks are not designed or intended to prevent, mitigate, treat, diagnose or cure any disease or health condition, including COVID-19/Coronavirus.”

The event organizer was former 2020 write-in gubernatorial candidate Jim Sexton, a conservative advocate on various liberty-themed issues. He suggested that school boards are a great place for regular Vermonters to start getting politically active.

Other speeches spanned subjects including Marxism in America, election irregularities, critical race theory in schools, gun rights, and a movement for a national constitutional convention.