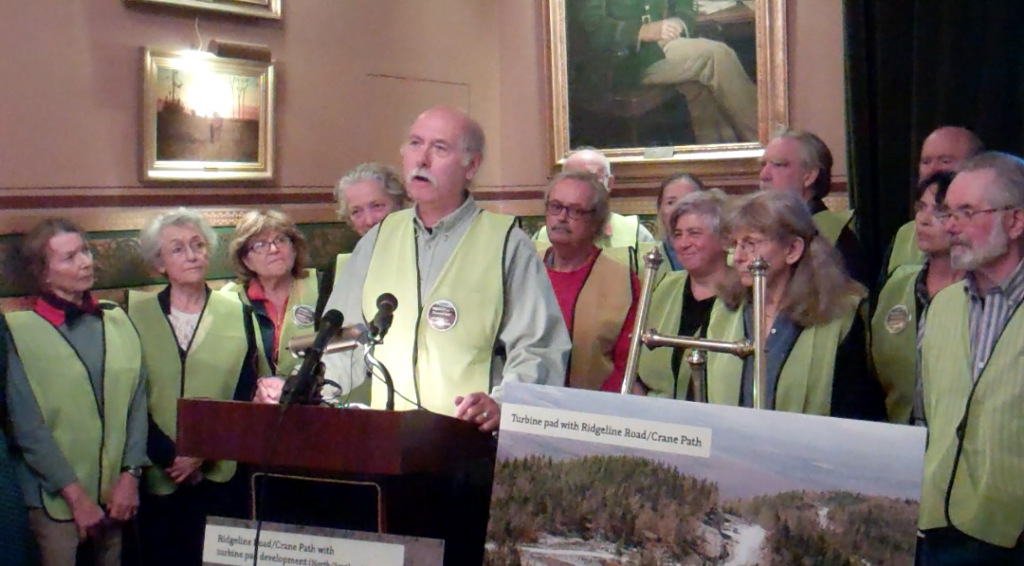 MONTPELIER — The 10-day window for the Legislative Committee on Administrative Rules members to respond to a public records request by Vermonters for a Clean Environment ends today. The records are expected to provide the public with details about communications between committee members and wind industry insiders.

VCE alleges LCAR members and lobbyists were engaging in text messages and hallway meetings during an Oct. 12 review of sound standards for industrial-scale wind turbines drafted by the Public Utilities Commission.

“We witnessed it to such a disturbing extent,” VCE director Annette Smith said at an Oct. 18 news conference.

The PUC rules for turbine noise were adopted by LCAR on Oct. 26 and include sound limits of 39 decibels during the night and 42 decibels at day for homes near industrial-scale turbines.

On Oct. 23, Smith said that four members of the committee turned over records. One email from Sarah Wolfe, of the Vermont Public Interest Research Group, offers Sen. Mark MacDonald, D-Orange, talking points for a rebuttal argument against the PUC rule.

“Thanks again for sharing this” Wolfe wrote. “Are you planning to have Aaron [Legislative Counsel Aaron Adler] draft a rebuttal? Either way, would it be helpful to have a written filing/email from us outlining our rebuttal of their points again?”

Other representatives to send in their documents early were Rep. Linda Myers, R-Essex; Sen. Joe Benning, R-Caledonia; and Rep. Amy Sheldon, D-East Middlebury. The subject of the material was mostly regarding the logistics of meetings.

Smith told True North that while Vermonters for a Clean Environment has received additional material, the group will offer full details once all records have been assessed.

“Our team really needs to look at what we are going to do with this stuff. … We may not get enough and [I] think we should go to court,” she said.

Smith said if any records are missing, it should be easy to spot.

“One of the things that we saw was texting. If we don’t get any texts, then we know that they are withholding something,” she said.

A key development which led VCE to request records was the manner in which LCAR reopened the rule making process at its Oct. 12 meeting, which Smith said was unjustified.

“There are changes that we want too, yet we saw no concerns over the numerous deficiencies that we outlined in our June testimony,” she said.

Smith said the most serious deficiency from the PUC rule was the lack of regulation from low-frequency noise and the lack of a property boundary rule, both of which exist in New York state.

Smith is also not happy about LCAR chair Mark MacDonald inviting Resources Systems Group’s director Eddie Duncan, a wind industry advocate, to the Oct. 12 meeting without informing VCE. MacDonald can be seen in the last three minutes of this video stating that he believes LCAR needs to hear Duncan’s testimony.

Ed Stanak, former Act 250 district coordinator and former president of the Vermont State Employees Association, said at last week’s news conference he had spent over three decades observing LCAR, and like Smith he was upset by the texting and hallway meetings.

“What I witnessed on October 12 … was a shocking abuse of process,” he said. “The committee indicated a blatant disregard for a fundamental principal and that is the presumptive competence of an administrative entity such as the Public Utilities Commission.

“The Public Utilities Commission undertook a rigorous process for months going through Vermont, conducting workshops, getting input from the public, including from some of the experts who testified before LCAR.”

Attorney Stephanie Kaplan said there is set criteria for LCAR to challenge the PUC rule and the criteria was nowhere to be found.

“From what I heard, that wasn’t what was going on,” she said. “They didn’t like the rule, they didn’t like the substance of it, and they were trying to change it with the industry lobbyists texting on their phones and meeting them outside and doing all kinds of incredibly inappropriate things.”

“Some members of the LCAR group have … dismantled the PUC rule by piecemeal in a chaotic policy making effort that exceeds the committee’s authorities and expertise.”

Image courtesy of Vermonters for a Clean Environment