The grades are in for Vermont’s economic progress over the last two years, and the main takeaway is that household income is down, despite some hopeful signs.

According to nonprofit think tank the Public Assets Institute, Vermont is one of ten states in the nation where median household income dropped last year. Income for 2017 was $57,513, down 2.4 percent from about $60,000 in 2016. Only Alaska fell further.

This was Vermont’s second decline in two years. 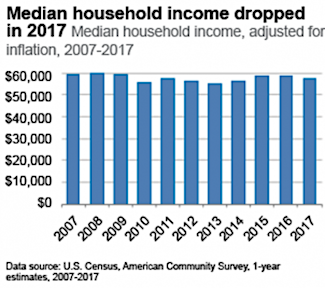 FALLING INCOME: Vermont was one of 10 states to have median household income drop last year.

“Inflation-adjusted median household incomes in July hit $62,450 according to the latest release from Sentier Research. That’s the highest level since Sentier started tracking this more than 18 years ago. And if you combine Sentier’s numbers with annual Census data, median household income is at all-time highs,” the IBD editorial states.

He said other possibilities include a lot of Vermonters live by themselves and don’t have the same earning capacity as a two-income household.

“It could also be that the economy just isn’t doing as well as we think in terms of generating high-income jobs or generating income growth in existing jobs,” Woolf said.

He added it’s difficult to pin down exactly why these economic trends occur.

“All we can really measure easily in the economy is the number of jobs, total wages paid, things like that,” he said. “It’s hard to figure out if the growth in income for existing jobs is keeping pace with the nation or that we are generating new jobs with higher rates of pay compared to other states.” 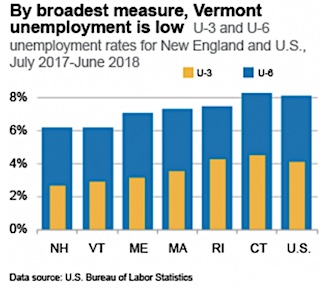 WORKING VERMONTERS: More Vermonters are working according to both the U-3 and U-6 unemployment data.

The report also gets into unemployment data, including both U-3 and U-6 criteria. U-3 is specific to the active workforce, whereas the U-6 rate accounts for both discouraged would-be job seekers and the underemployed.

The report also breaks down data regarding Vermonters living in poverty.

The report states: “The number of Vermonters in poverty peaked in 2010, soon after the official end of the Great Recession. Since then, the trend has moved in the right direction, but according to new U.S. Census data, almost 68,000 Vermonters — 11.3 percent — lived at or below federal poverty thresholds. For a couple under 65, the threshold was $16,493 last year and $25,094 for a family of four.”

The Public Assets Institute 2018 Report Card is based on 2016 policy recommendations published in “A Framework for Progress: Investing in Vermont’s people, infrastructure, and good government.” The group offers grades which assess the progress, or lack thereof, towards each recommendation.

The three main categories are:

1. Ensure that work pays and families meet their basic needs.

Each of these is divided into sub-goals scored on an eight-point scale. No points amount to “no progress” and eight points equals “completion.” High scores don’t necessarily mean a win for conservatives, however, as some policy goals — higher minimum wage and expanded government benefits — appear to derive from the Democrat and Progressive agenda.

For example, a subcategory for No. 1 is to “Increase the state minimum wage and state Earned Income Tax Credit.” Public Assets Institute scored it four points:

A sub-goal of category No. 2 is to “improve adult education and workforce training,” which was scored with two points. “Act 69 of 2017 established a workforce working group to recommend improvements to current workforce training and preparedness and a new Career Pathways Coordinator,” the report states.

One thought on “Report: Vermonters earning less, but more have jobs”