Americans fed up with governors collapsing state economies have staged protests in about a dozen states this week, and Sunday and Monday saw Vermonters join in with protests in Johnson and Montpelier, which are set to continue into the week.

Facing skyrocketing unemployment rates that have soared from low single digits to as high as 20% in some states, Americans have begun breaking away from stay-home orders and are staging protests in state capitals and other towns and cities.

In Vermont, a group called Vermonters Against Excessive Quarantine has planned a peaceful rally to take place 11 a.m. to 4 p.m. Wednesday in Montpelier. 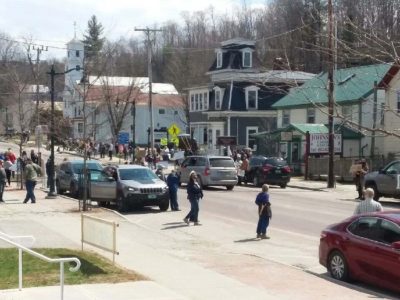 Hundreds of Vermonters came out Sunday in Johnson to protest potential closings of colleges in the Vermont State Colleges System.

“Join in this as other States are also doing the same in their Capitols protesting the abuse of our God-given Liberties and to end this shutdown,” says the group’s event description posted to Facebook.

The event will follow protests that occurred Sunday in Johnson, in Lamoille County, and Monday in Montpelier. Organizers there gathered local residents using social media to protest the newly announced recommended closure of Northern Vermont University’s Johnson and Lyndon campuses, as well as Vermont Technical College campus in Randolph.

“The VSCS must prepare for a possible declining enrollment of 15-20 percent at its residential campuses due to COVID-19 concerns and a corresponding budget deficit approaching $12 million, even after substantial budgetary actions,” the Friday announcement states.

Spaulding said in a statement that “the impacts of COVID-19 will linger for months, maybe years. We cannot wait and hope for recovery, we must act decisively to chart a course toward long-term viability.”

Bill Moore, a policy analyst for the Vermont Traditions Coalition, attended the rally in Johnson and said hundreds of people turned out to demand that officials find other solutions. The plan announced Friday would cut 500 employees, close Northern Vermont University, consolidate Vermont Technical College’s operations at its Williston campus, and close the VTC campus center in Randolph.

“Johnson town leaders helped bring this about,” Moore said. “There was a lot of kids, there was balloons, there was flags and signs, it was a good old-fashioned hippie protest, and their voices were heard, I believe.”

Scott has said he will do everything he can to support efforts to keep the schools open. 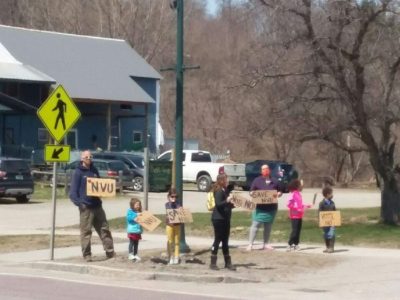 The Facebook group Protest Vermont State College (Permanent) Closures! is organizing the protests. On the page, Catherine Cook, of Ryegate Corner, posted her opinion on the closings: “I hope this decision can be reversed. These colleges are critical not only for students who cannot travel as far to school, but for helping young adults stay in state to work.”

The threat of closures spawned a petition at Change.org to have Chancellor Jeb Spaulding removed from the Vermont State Colleges System.

“This blatant attack on public institutions of higher education, and particularly rural areas, cannot stand,” the petition states. “Remove this man and his incompetence from the position of Chancellor.”

The petition was at 2,052 signatures as of Monday evening; organizers are seeking to get 2,500.

On the cause to reopen the economy, commenters on Twitter have begun expressing their frustration.

When will Vermont be liberated? 35 deaths in a state of 600,000+ is no basis for such reatrictions. #liberateVermont

Another person tweeted about how even landscaping delivery jobs were shut down.

I honestly don't understand why I'm allowed to have stones delivered to my house to fix my driveway, but not if they're for landscaping. Liberate Vermont!

Not everyone is happy to see the protests. Patrick Salomon, who works at Middlebury College, posted on Facebook that he thinks protests are going to get more people sick.

“In attending this rally you’re likely playing into an astroturfing campaign initiated by a group who is not interested in your health or well being,” he wrote.

As of Monday evening, 38 people have died in Vermont from the coronavirus.

The protests across the nation share a common theme —  that the collapse of the U.S. economy due to the closing of non-essential businesses and stay-home orders will cause greater calamity than COVID-19.

Civil disobedience is spreading into local governance. Wisconsin’s Racine County Sheriff Christopher Schmaling is among the first sheriffs to say he will not enforce excessive measures.

“Overreaching measures taken by State government will have dire lifetime consequences for businesses, homeowners, and families,” he said.

Pressure to reopen Vermont is building as jobless claims have reached more than 82,000 since Scott formally declared a state of emergency about a month ago.