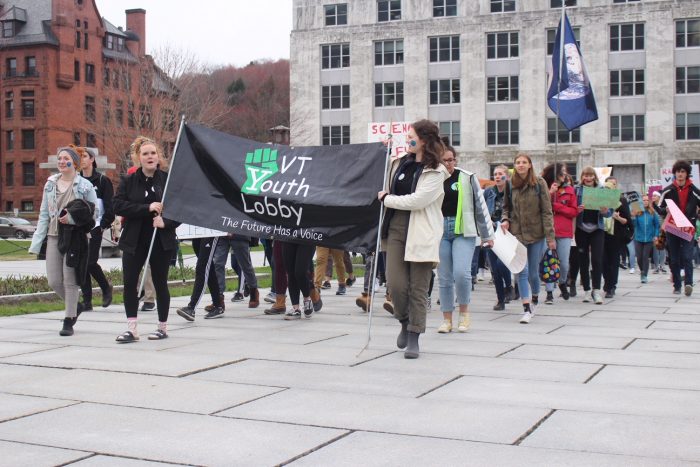 LOBBYING ORGANIZATION?: Is the Youth Lobby a registered lobbyist organization? The group’s website says no, but its close associations with VPIRG and 350VT are raising some eyebrows over its activism and use of taxpayer-funded assets.

A student-led climate-change activism organization called the VT Youth Lobby is using public taxpayer assets to organize and promote its activism while having close ties to VPIRG and 350VT.

Based on speeches delivered at the rally, Youth Lobby students say time is running out for life on planet Earth and that dramatic change is needed to avert looming environmental disaster.

According to the Youth Lobby website About Us page, the group was formed with help from the Vermont Public Interest Research Group (VPIRG) and 350VT, two top environmental lobbying groups in the state. The group denies being a lobbying organization, however.

“We are, in no way, an ‘official’ lobbying organization, and none of us are paid lobbyists,” the website states.

The Vermont Secretary of State’s online Lobby Disclosure Database appears to confirm the claim, as the Vermont Youth Lobby is not listed in the database. TNR’s attempts to contact the organization by phone, email and Facebook messaging were not returned.

However, the group is using taxpayer assets associated with the Harwood Unified Union School District.

On May 3, the group’s Join Us page read had a sign-up form that read at the bottom, “This form was created inside of Wwsu.org.” The Wwsu.org domain name is the website of the Harwood Unified Union School District.

The wording about the form being “created inside of Wwsu.org” was removed as of May 8.

Since WWSU is a school district, and therefore a taxpayer asset, the use of the wwsu.org internet system makes it appear that the state is supporting the activism of the Youth Lobby.

When True North signed up for the group’s newsletter through the Youth Lobby website’s “Join Us” prompt, text on the page indicated that the environmental activist group 350VT is accepting tax-deductible donations for Youth Lobby. “350VT is collecting funds for the Youth Lobby Day. All donations will go directly to the Youth Lobby organizing group,” the newsletter signup page said.

Also appearing on the Youth Lobby’s Join Us page is the group’s contact phone number. On a different page for the group’s “third planning meeting” in spring of 2016, that same number is listed as the number for Matt Henchen, an “adult mentor” to the group whose email address is listed as a wwsu.org address — another taxpayer asset. The information on the site appeared as follows at the time of publication: 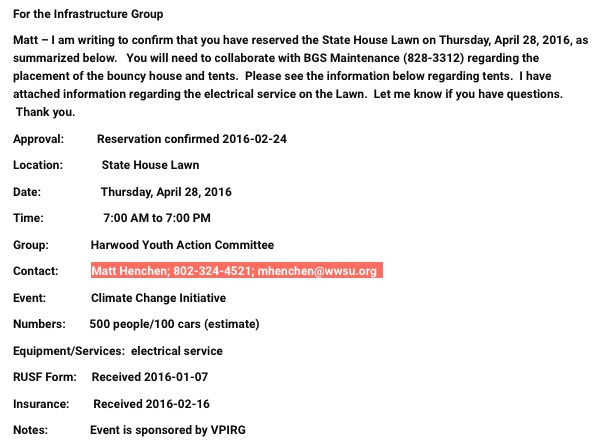 On a Youth Lobby web page promoting the April 12, 2018, “Rally for the Planet,” the group urges readers to “consider donating,” and says 350VT is collecting funds for the Youth Lobby Day and that “all donations will go directly to the Youth Lobby Organizing group.”

It reads as follows:

**Any donations from schools will be used to coordinate a two-day Youth Activism Conference this Fall. Please donate – every bit helps.

At the bottom of that section, contact information is once again given for Matt Henchen, and the email listed is the same wwsu.org address — a Harwood Unified Union School District account. Henchen’s number is listed there as well.

Rob Roper, president of the Ethan Allen Institute, a free-market think tank based in Montpelier, said his hunch is that Vermont Youth Lobby is indeed a lobbying group.

“They don’t appear to be registered on the secretary of state’s website. I’m shocked,” Roper said. “My guess is that they are lobbying but have not registered as lobbyists or filed any of the necessary disclosure forms.

“I understand that Bill McKibben’s group [a 501c3, which has very limited lobbying abilities] is raising money for what appears to be a 100 percent lobbying purpose. What does the secretary of state have to say about this? The attorney general? Are these kids going to be forced to comply with the law, or are rules just for conservatives and suckers?”

On the other hand, Roper wonders if Vermont’s lobbyist registration laws are simply “stupid.”

“Is it absurd that we’d require a bunch of kids fired up about an issue to register as lobbyists. Isn’t the whole framework a violation of our 1A right to petition government for redress of grievance?” he said.