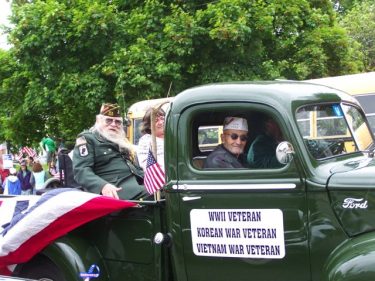 Vermont VFW’s Donald Dockter: “Unfortunately with the declining members of Congress who have actually worn the uniform of the United States Armed Services, we are continually battling to maintain what benefits that we do have and encourage them to recognize new issues that continually pop up as our men and women in uniform are sent into conflicts by them.” Pictured: Vermont veterans at the 2018 Middlebury Memorial Day Parade.

“I’m a 100-percent disabled veteran. I am trying to get dental care help from the White River Junction VA,” McColgan told True North.

But McColgan says he is struggling to get that help.

“I guess it’s no surprise that the department there is dysfunctional. They don’t call you back and even the service providers say that,” he said. “What gets me is that I have a veteran friend, with no disability, who lives in Minnesota. He told me recently that it took approximately three weeks for him to get total dental care at the VA there. I’ve been working on this for the second year, to get proper treatment; it’s weird isn’t it? The VA is a cesspool of dysfunction from my perspective.”

McColgan told True North he believes a doctor at the hospital is rejecting dental care for disabled vets who are otherwise qualified to receive such health-related treatment. True North was unable to verify McColgan’s claim, however.

“I can say that they rejected my treatment plan by professional outside dentists for many years, plus they keep moving the goal posts, as I try to receive simple dentures as a 100 percent disabled Veteran — all this to increase my self-confidence and self-esteem,” he said.

What makes the VA facility in White River Junction frustrating to veterans in search of dental care is that the hospital, unlike most other VA hospitals in other states, farms out treatment plans to community dentists.

“We actually don’t have dental care here on site,” Katherine Tang, public affairs officer at the VA in White River Junction, told True North. “We refer all of this (dental work) out to the community.

“What would happen is that veterans would come to us, request dental care, and then we would ask them what dentist (in their hometown) they like to go to visit? We ask them to send the plan to us, and then we’d have to approve it. … We may now be the only VA facility (in the country) without dental in house. Our veteran population is too small (to justify an in-house dental staff).”

Tang said she doesn’t know why McColgan isn’t getting call backs from the VA in Vermont, but she noted that she would look into his specific case. She stressed that the White River Junction staff work hard to call back every veteran contacting the hospital.

“When we receive a referral like his, someone on staff calls the veteran and later calls the provider to let him/her know whether or not there’s an approval or denial (of the treatment plan),” she added. “It’s up to the community provider to schedule the appointment.”

The Veterans of Foreign Wars, based in Kansas City, Missouri, has reached out to help veterans whenever they have difficulties dealing with the byzantine ways of the VA. Veterans do not have to be paid members of the VFW to get assistance.

“For problems with the VA, we typically refer veterans to our National Veterans Service wing,” VFW official Michael Edson said. “Any veteran can use this service for free. It’s a network of our service officers and other individuals who are well versed with the VA system. These people work with veterans on a case-by-case basis; they work to get them what they deserve. Veterans (like Mr. McColgan) with VA problems should call our hotline at 800-839-1899. The veteran will get attention.

The VFW’s state adjutant in Vermont is Don Dockter, a former Vietnam-era U.S. Navy dental-equipment repair specialist. Dockter prefaced his comments to True North by stressing that his own opinions do not reflect the opinions of the Veterans of Foreign Wars organization.

“Any veteran with a VA problem should contact Pat Leahy, Bernie Sanders, and Peter Welch; they will get right back — and yes, it does suck. We as veterans, from the neck up, we can’t get nothing,” Dockter said.

Dockter is a 20-year retired Navy veteran who has to pay for his own dental insurance and struggles to “get anything done.”

“(Mr. McColgan) is not alone. … Back in the 1990s WRJ had a full dental office but they were using it to treat the teeth of state prisoners — that ticked me off. When it comes to dental, veterans are not covered. The prisoners got more immediate treatment. It’s a sad situation but that’s the way it is.

“Concerning Mr. McColgan’s issue, our VA Hospital in White River junction is not at fault. This is a countrywide mandate. We are very fortunate to have one of the top-rated VA hospitals serving our area in the United States in White River Junction.”

Dockter would like to see more U.S. elected representatives gain a better appreciation for the needs of men and women who have served the nation after they return home.

“Unfortunately, with the declining members of Congress who have actually worn the uniform of the United States Armed Services, we are continually battling to maintain what benefits that we do have and encourage them to recognize new issues that continually pop up as our men and women in uniform are sent into conflicts by them,” Dockter said. “They do listen to us as we have approximately 1.7 million members of the Veterans of Foreign Wars.”

A staff member in U.S. Sen. Bernie Sanders’ constituent office in Burlington said the 2020 presidential candidate has been a long-time advocate for veteran benefits. In 2016, Veterans for Bernie Sanders was an association of military veterans supporting the senator’s presidential run while veterans supporting President Donald Trump’s campaign affiliated with the Veterans for Donald Trump group on Facebook.

The staffer told True North that a number of caseworkers in Sanders’ office are working with Vermont veterans with VA-related problems, including dental-related issues. Veterans are encouraged to contact the senator’s Burlington office with more information so caseworkers can begin to resolve the problem.