The Vermont State Police have begun wearing body cameras in day-to-day interactions with the public, as the technology is known to benefit both the public and officers while documenting physical altercations.

This effort has been a long time in the making. This was “a multi-year process to secure the necessary funding and fulfilling a commitment to Vermonters,” according to a statement by the Vermont State Police.

“We’ve been working toward this important step for many years,” said Col. Matthew Birmingham, director of the Vermont State Police. “We already appreciate the value and importance of our cruiser cameras and body-worn microphones, and this will enable us to serve our communities with another dimension of transparency.” 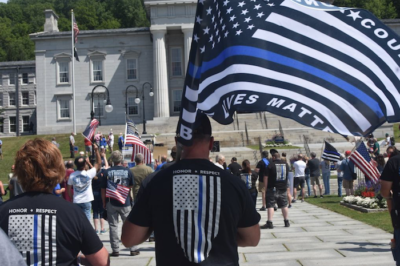 CAMERAS FOR THE BLUE: Body cameras are expected to help protect both the public and the police from false accusations.

State police and legislators also are working on getting systems into place to store all of the video footage.

The first barracks to get these new body cameras was the Westminster Barracks, in early November, followed shortly by the Middlesex and Williston barracks. By mid-December all 200 uniformed police for the state’s 10 barracks should be using the cameras.

“I think they protect both sides equally,” he wrote in an email. “The recordings can be viewed by the public to ensure officers are following protocol and the police can utilize the recordings to aid in investigations and document the situation in its totality.”

“We have been looking to acquire body cameras for around five years and have had dashboard cameras for over twenty years, so for a long time we have seen the importance of this technology,” Manley added.

Body cameras have been a hot-button issue for the City of Burlington. In 2019, Mabior Jok and Congolese immigrant Jérémie Meli, both black males, were arrested in separate back-to-back altercations Sept. 8-9. While charges against both men were dropped, police body cam footage of the incidents sparked a debate over whether police used too much force during the arrests.

While rallies against police across the nation have been numerous, there have also been efforts to show support for police even in Vermont. For example, in the City of Barre, a “Back the Blue” flag will be flown in front of the city hall. There have also been numerous demonstrations, including one early in the year in Burlington, in support of police.