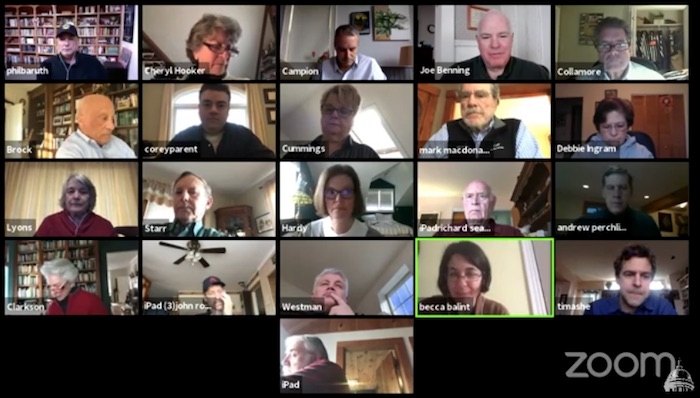 A Senate committee will meet Thursday morning to address the looming problem of Vermonters choosing to receive the $600 federal unemployment payment rather than go back to work.

At a Senate Caucus held on Zoom and uploaded to YouTube, Sen. James McNeil (R-Rutland) said a local employer told him some workers want to be laid off in order to receive the generous weekly payment contained in the $2.2 trillion federal relief package passed last week by Congress.

The relief package includes $600 weekly for up to 39 weeks in addition to state unemployment benefits. At present the maximum Vermont unemployment  benefit is $513/week. Vermonters could receive a maximum of $1,113/week.

In urban areas with high average wages, an extra $600/week might not keep employees away away from work. But Vermont is not New York City or LA. Sen. Alison Clarkson (D-Windsor) agreed Vermont will have a problem. “This is creating disincentive for work that we are going to be addressing. We need to examine it and figure out how we have an incentive to work, and that we don’t undermine that.”

Clarkson, vice-chair of Senate Economic Development, Housing and General Affairs Committee, said they will discuss solutions to the problem 9:30 – 11:45 Thursday morning. (Click on link above to watch on YouTube.)

Senators also discussed the potential devils in the details of remote voting. The Senate hopes to hold an in-person vote approving remote voting by next Tuesday.

There’s pressure within the Senate to move forward with remote voting. Senate Judiciary is discussing legislation (S.338) to get vulnerable people out of prison, Judiciary Chair Dick Sears said. “Prisoners who are non-violent and need to have sentences adjusted” need the Legislature to act, he said. “The quicker we can get back to Montpelier and get the remote voting, the better we will be.”

Senate Pro Tem Tim Ashe cautioned that “it’s also everyone’s right to debate that” and that while the voting process can be accelerated for consensus issues, it shouldn’t be rushed on issues where there will be disagreement.

Sen. Randy Brock (R-Franklin), who built a highly successful security business before joining the Senate, said he’s concerned remote voting could pose security breaches. “Have we thought through this thoroughly?”

Sen. Joe Benning (R-Caledonia) said the proposed rules that will be run through the Rules Committee would require all senators to be visible and audible when voting. “I don’t see security is something that has to be hit by a finetooth comb,” Benning said. “And I don’t see how anyone couls step in and become my vote if you are seeing my lips move on the screen and hearing my voice.”

Brock said that as long as the Legislative IT team is involved throughout the process and backup systems are in place (such as electronic signatures), he’s okay with the resolution moving forward.

In the short term, at least, getting all 30 senators online at the same time could pose a practical problem. Sen. Richard Mazza (D-Colchester/Grand Isle) is notoriously computer-averse and participates by phone. Sen. Jeanette White (D-Windham) has had computer problems at home.

Several senators also expressed concern that the press and general public could be left out of the process by remote voting. Another senator said she finds YouTube meetings “chaotic” and said she hopes the more deliberate, orderly pace of discussion that prevails in in-person Senate meetings will be preserved.

However, Sen. Becca Balint (D-Windham) seemed to be expressing a consensus when she said, “we’ve moved beyond the point of if we’re going to vote remotely.” The issue before them now is how they will vote remotely, she said.