WATERBURY, Vt. — Americans who never owned or fired a gun are learning about the Second Amendment for the first time amid the coronavirus outbreak, according to the owner of Vermont’s largest gun shop.

Following an order by President Donald Trump, gun shops are guaranteed to be open for the duration of the outbreak. Guidance issued Saturday by the Cybersecurity and Infrastructure Security Agency (CISA) categorized gun stores, shooting ranges and weapons manufacturers as “essential” businesses.

Parro said he has instructed his staff to go out of their way to help new customers eager to buy guns in response to the crashing economy and government-mandated lockdowns. Staff members are trained to explain the basics of firearms safety, such as how to load and handle a gun, as well as how to store it properly. Parro hopes to expand gun-training opportunities at his store location. 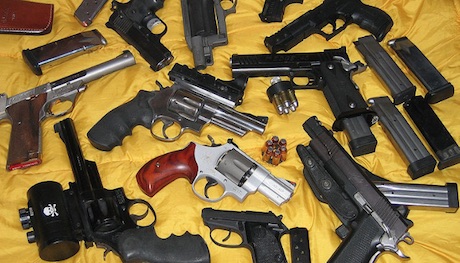 SILVER LINING?: While government officials advise Vermonters to seek new skills over the course of the shut-down, many residents have sought out guns as a way to learn something new and protect their households.

He’s also using this opportunity to educate new gun owners on why the Second Amendment is an important freedom.

“I’m trying to plant the seed,” he said. “… I’m trying to educate these first-time owners to get them to understand how important the Second Amendment is.”

Due to the increased interest in guns, along with confusion over what businesses are free to operate during mandated shutdowns, the federal background check system has become backlogged.

“A lot of people having been put on delay,” Parro said.

According to current federal law, if a background check for a gun purchase takes longer than three days to complete, the sale of the firearm is approved by default.

Earlier this year at the Vermont Statehouse, H.610 was written to make Vermonters wait until a background check is completed before taking possession of a firearm. The bill has since been modified so that once three days are up, the gun shop can decide to proceed with the sale.

As the bill made its way through committees, Parro testified that forcing gun buyers to wait beyond three days would infringe on their Second Amendment rights, and that delays in background checks can happen for simple data-entry errors or technology glitches.

Parro added that based on his discussions with lawmakers, he was surprised at “how little people really know about gun laws.”

Eric Davis, the president of Gun Owners of Vermont, a gun rights organization, also said he’s seeing a spike in interest about gun ownership and use.

“We’ve heard it from the gun shops — it is funny how something like this sort of changes people’s perspective,” Davis told True North. “It kind of proves what we’ve known; there’s a reason that we have this [constitutional] right. People are starting to see that now.”

Davis said it’s a positive development that gun stores and producers are free to stay open during the economic shutdown.

Still, Davis has requested that lawmakers and the governor suspend Vermont’s ban on standard capacity magazines and the ban on private gun transfers “so that Vermonters might be able to obtain the means to protect their families as guaranteed by our constitutions.”

“Vermont’s restrictive law prohibiting the transfer of standard capacity magazines has made it difficult for FFLs to maintain inventory as suppliers must now ship firearms with Vermont compliant magazines which are harder to get,” he wrote.

Davis told True North that stores aren’t taking the virus lightly. Some of them are restricting how many customers can come inside at one time, and shoppers are encouraged to keep safe distances apart.

Davis said new buyers are learning first-hand how many checks they have to undergo to complete a purchase.

“I think a lot of these folks now understand it; they have purchased a gun and they saw how many hoops you have to jump through,” he said.

He hopes new gun owners get excited about participating in gun ownership, and get the training needed to stay safe.

“We very much want to welcome people to our lifestyle,” he said. “We encourage them to not only buy a gun but get some training, take a class, talk to friends who know guns, and have them take you shooting.”