In the aftermath of last week’s violence in Charlottesville, Va., Vermont Republicans are distancing themselves from “Unite the Right” white supremacist groups as well as from violent leftist groups.

In a phone interview Thursday with the Burlington Free Press, Vermont Gov. Phil Scott said, “The bottom line for me is white supremacy, bigotry, racism can’t be tolerated or explained away. We have to confront the issue and stand up to it.”

Scott also said Confederate monuments should be removed from public places to Confederate military cemeteries or even museums, a viewpoint rejected by Maine Gov. Paul LePage.

Democrats spent the week criticizing the president for not going far enough in his initial statement Saturday following the riot in Charlottesville. “We condemn in the strongest possible terms this egregious display of hatred, bigotry and violence, on many sides,” Trump’s original statement said.

The acts of violence and hate seen today do not represent American values and I join leaders across the country in condemning them. pic.twitter.com/vC1FT9y7ga

The governor has not called out the left-wing violence that also occurred at the Charlottesville melee. He did, however, release a 3-minute video Thursday on Facebook criticizing the president. He also said the issue should be discussed in classrooms across the state.

“The Vermont Republican Party condemns white supremacy and all forms of hate,” Bartley told True North Reports. He said Vermonters need to condemn violence as a way to solve differences and to find common unity. 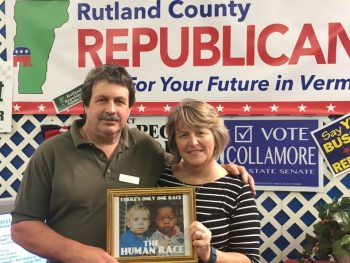 “The Vermont GOP is focused on making Vermont a better place to work, a more affordable place to live, and a safer place for our children. Tweeting doesn’t end bigotry. Standing together does,” he said.

Republican Wendy Wilton, treasurer of the City of Rutland, and a vocal GOP leader in the state, said no place is immune to racial and political violence coming from the right or the left.

“The violence that broke out in Charlottesville could happen anywhere in the United States,” she told True North. “We must be strong in our communities to prevent violence from any group, especially the fringe elements of extremism, either far right or far left.”

Wilton joined Republican Rep. Doug Gage at the party’s booth at the Vermont State Fair in Rutland on Tuesday.

The pair displayed a photograph of two small children, one black and the other white, to promote a common heritage: “the human race, not racial differences.”

The two prominent Vermont Republicans encouraged unity and condemned violence from both sides.

“There’s no place for violence on the right or the left,” Gage told True North Reports. “We’re all human beings. There’s been enough division. It’s time to come together.”

Images courtesy of State of Vermont and Wendy Wilton