Vermont Republicans have always been opposed to the radical climate agenda embodied in the Global Warming Solutions Act. Gov. Phil Scott vetoed the bill in 2020 only to see the veto overridden despite 100 percent Republican support. Scott also vetoed the component of the GWSA, the Clean Heat Standard, in 2022, this time successfully and again with all Republicans on board.

However, with a few exceptions, the opposition by Republican legislators has tended to be tepid. Republicans have been willing to vote against a bill, but not as enthusiastic about speaking out against it aggressively, if at all.

That seems to be changing, at least to some degree.

Following setbacks in the 2022 elections giving Vermont Democrats strong supermajorities in both chambers of the Legislature, Republicans can no longer rely on State House politicking to block the Clean Heat Standard or other bills designed to drive up the cost of, regulate, or ban fossil fuel use. It is now up to the public to pressure legislators to vote no, and to the Republicans — Scott and his administration, especially — to rally the public. 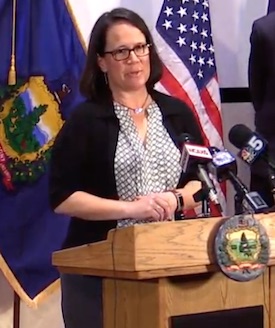 Julie Moore, Secretary of the Vermont Agency of Natural Resources

On Jan. 12, Agency of Natural Resources Secretary Julie Moore, speaking for the administration, opened her testimony to the Senate Natural Resources and Energy committee warning that “even in desperate times, there is a line between brave and foolish” — the implication being that passing the Clean Heat Standard bill (S.5) would be foolish.

Moore went on to warn that fulfilling the GWSA mandates for greenhouse gas reduction by 2025 and 2030 would “cause significant disruption, impact other priorities, come with real costs, and risk the support of those who are being asked to pay. A rough estimate of the cost to implement identified in my earlier presentation [on the GWSA] from the thermal sector — just the thermal sector — exceeds $2 billion. … We have to reckon with the fact that there are real and significant upfront costs.”

Moore warned that the newly constituted Clean Heat Standard bill still does not address the governor’s concerns (those that led to the veto of the previous bill) about a lack of understanding in regard to how the bill would work and what the fiscal impacts of the bill would be.

Committee Chair Sen. Chris Bray, D-Addison, challenged the general assertion that the Clean Heat Standard is “unaffordable,” and gave away the proponents’ game of hiding costs to escape responsibility. “One of the problems we have now is the inability to express the cost, is because we haven’t done enough analysis. I don’t know how it [the Clean Heat Standard] can be characterized as too expensive without having had a similar analysis done by somebody so that that would be a data-driven characterization.”

Moore, explained to Bray and others that while granular data on what the cost of a Clean Heat Standard would be for individuals and businesses is unavailable, we have a good idea what total costs will be: over $2 billion for the thermal sector alone, not including administrative costs. And that’s unaffordable.

To address this point, Moore announced that, absent any interest by the Legislature in finding out what the costs and impacts of their proposal will be, the administration has contracted with the Energy Futures Group to study a thermal emissions reduction plan that would meet the GWSA emissions targets for the thermal sector, as well as determining the costs and benefits to individual consumers and to the Vermont economy as a whole.

When Speaker of the House Jill Krowinski, D-Burlington, found out about this, according to a report by VTDigger, she responded, “I was surprised to hear about a plan, that we need a plan, that we need to develop a plan. We do have a plan. We passed the Global Warming Solutions Act. We have a Climate Council. The Climate Council has been doing incredible work to produce policy recommendations for us to act on, and that is what we’ve been doing.”

But the Climate Council’s “plan” contains none of the analysis or the details the Scott administration — and Vermonters — are looking for regarding costs, economic impact or return on investment. Nor does the Council, like the majority in the Legislature, seem to have any interest in providing answers to any of those questions. In the year since formally recommending their Climate Action Plan to the Legislature, the Council has produced no such data or analysis.

Moore gave a number of examples where there is a lack of information necessary to craft responsible legislation, and concluded her testimony, “I urge that we do not let our desire to do something cause us to overlook or ignore important and very real unknowns, including the data needed to design a program that is complicated and far reaching.”

On the heels of Moore’s testimony, Republican House members led by Rep. Mark Higley, R-Lowell, introduced two bills, the first of which would repeal the Global Warming Solutions Act, and the second which would repeal the section of that law mandating that Vermont participate in the California fuel standards (Clean Cars II), which will ban the sale of new internal combustion engine cars by 2035.

Rob Roper is a freelance writer who has been involved with Vermont politics and policy for over 20 years. © Copyright True North Reports 2023. All rights reserved.