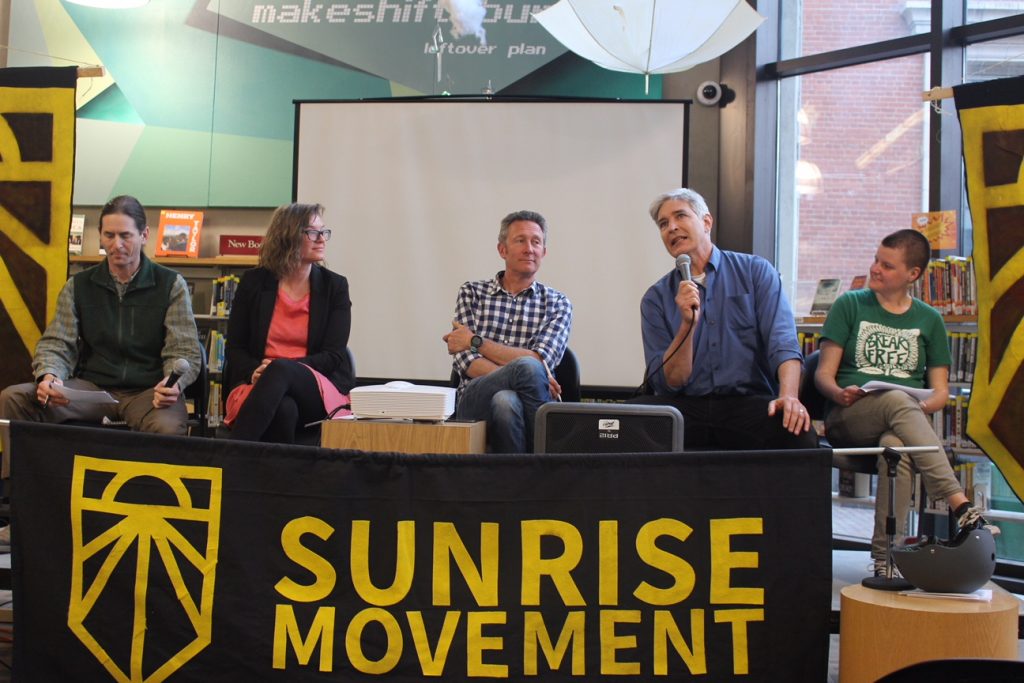 Controversial material found on U.S. Rep. Alexandria Ocasio-Cortez’s website urges an overhaul of the nation’s energy systems, as well as a guaranteed government services for everyone, including people “unwilling to work.” The Green New Deal has been estimated to cost  $13 trillion for the nation.

On the issue of global warming, Magdalena Friel of the Sunrise Movement’s Burlington hub said time is running out for humanity.

“We need to listen to the science and stop the climate crisis, and we have under 12 years to do it — we want a complete transformation of our society and our economy,” she wrote. “We want to see legislators treat this like it is a crisis, like this is wartime, because that’s how serious this is. We need to get to to a 100 percent renewable energy economy. We need to end fossil fuel subsidies. We need good jobs, and we need justice for those on the front lines of the climate crisis.”

A proposal from a few years ago to put wind turbines on Lake Champlain came up during the meeting. Zuckerman said he could live with the poor aesthetics of such wind farms knowing that they are part of the effort to fight global warming.

“I could look through the wind turbines to the Adirondacks and I would see the beauty of my daughter’s future,” he said.

He stressed that there will be catastrophic consequences if climate action isn’t taken soon, and he linked up his political agenda to weather events that have gone on for centuries.

“The consequences of not doing it are mindboggling — with food production, climate refugees, we had washouts in Rochester again last week, huge rain washouts from climate change, the intensity of these storms,” he said.

He did acknowledge that the economics for wind power is tricky due to its intermittent nature.

“The only impediment to that is whether or not it actually does make economic sense, because yes, it’s been very windy today, but there are a lot of dog-days in summer where there is no wind blowing out there in the lake,” he said.

Farley, when talking about the gas tax, cautioned that implementing such could end up hurting the very lower class people you are trying to help.

“A gas tax is gonna force the poor people to slash consumption by far more than the rich — you can take that as an economic fact.”

Colburn cautioned about implementing a carbon tax, but ultimately she appears to support it.

“I agree … that carbon pricing is just one piece of the puzzle and we’ve had some studies done in the legislature that tells us exactly that,” she said. “That said, a lot of the investments that are needed to really start to move the kinds of transitions we are talking about do require revenue, they do require investments. So that means either moving money from somewhere else to pay for these things or finding new sources of money.”

Macuga talked about not getting too obsessed with national politics, but she encouraged more involvement in local activism.

“I think that national politics are incredibly important but I’m not gonna wait for the guy in the White House to do something about it,” she said. ” … We need everyone to participate, we can make these changes in Vermont and set a precedent for the rest of the country.”

Miller talked about wealth inequality and how he believes all of the green jobs are going to solve the riddle of income inequality.

“I think wealth inequality is a massive, massive problem and it’s growing,” he said. “And the truth is the scale of climate change, the transition changes that are going to be required to get to zero emissions by 2030 is massive and it may just be the only way to really radically address the issue of wealth inequality.”