A Vermont lawmaker says he received a threatening phone message this week demanding that he publicly condemn President Donald Trump or lose his livelihood.

In a House Republican Caucus meeting Thursday, state Rep. Pat Brennan, R-Colchester, told fellow Republicans that he received the threat from a caller with a Philadelphia area code. He received a threat by email as well. 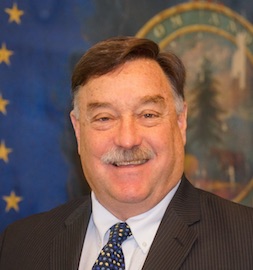 “I don’t know if anyone else got one, but I got a basically threatening phone call and email last night from a 215 area code, calling me by name [and] telling me they’ll be coming to get me and I’ll never work again in the state if I don’t denounce Trump,” he said.

Brennan said he has the caller’s name and believes he may have been a 2015 UVM graduate.

“I listened to the message a couple of times and it’s threatening,” he said during the Zoom conference meeting.

Brennan revealed the news while Republican lawmakers were discussing J.R.H.1, a joint resolution by Democrat, Republican and Progressive co-sponsors that denounces the president and urges his removal from office “by his Cabinet or by the Congress.”

It is the first business being pushed by state lawmakers in the new legislative biennium. Sponsors plan to send the resolution to Trump, Vice President Mike Pence, and the Vermont congressional delegation.

Regarding the resolution itself, Brennan said that he doesn’t agree with the intent of such political advocacy.

“Every year, for the last number of years, we come into a new session immediately faced with a resolution that’s controversial,” he said. “I am personally sick of that. This puts us in a box every year.”

While other Republicans at the caucus meeting expressed disagreement with J.R.H.1, the full House on Thursday passed the resolution 130-16, according to a video of the session. The Senate on Friday passed the condemnation of Trump almost unanimously; Sen. Russ Ingalls, R-Essex/Orleans, offered his lone dissenting voice vote, according to the Zoom video of the session.

Politicians and media have been jumping on a bandwagon to condemn the president after a peaceful Trump rally Wednesday in Washington, D.C., was marred by hundreds of rioters who broke into the Capitol Building and committed acts of vandalism. Capitol Police shot one unarmed Trump supporter dead, and one police officer also died from injuries sustained while physically engaging with protesters. Three other people died of “medical emergencies.”

Some Republicans on the Zoom conference call expressed support for the resolution, while others, like Rep. Brian Smith, R-Derby, criticized the effort.

“There’s a knee-jerk reaction here to something that happened 24 hours ago, and this resolution seems to be contradicting and condemning about 100,000 people for the actions of two or three hundred — I don’t think it’s fair,” he said. “I don’t think President Trump did the right thing, and his actions were not good, but he’s leaving in two weeks.”

Rep. Vicki Strong, R-Albany, said it’s too early to know who really caused the riots, and she urged lawmakers to avoid any rush to judgment.

“The news is constantly changing. … There’s a lot of speculation and I am just not comfortable jumping on this whole thing when we haven’t done due diligence to know.”

Multiple Vermonters who took a bus to the nation’s capital to join the Jan. 6 “Save America” rally told TNR they heard rumors that members of Antifa had infiltrated the crowds and may have been involved in the attacks on the Capitol Building.

The New York Post on Thursday reported that at least two Antifa members posed as Trump supporters to infiltrate the Capitol, according a law enforcement source. “The infiltrators were recognized due to their participation in New York City demonstrations, and were believed to have joined in the rioting so that Trump would get blamed,” the source told The Post.

The Washington Times, in an updated and corrected article, reported that a law enforcement source told the paper that “professional protesters were in the crowd posing as Trumpers. They were preaching violence. As they approached it was announced that [Vice President Mike] Pence had said he has no Constitutional authority. The crowd got mad. The agitators used this to whip-up anger. If the Feds are really intent on making the linkage between the instigators and Antifa, the evidence is there.”

Fox News reported Friday that “An anti-Trump activist who once said he wanted to ‘rip’ the president out of office entered the Capitol Building Wednesday alongside a mob of pro-Trump protesters, but he said he was just there to ‘document’ it.”

Despite Trump’s repeated calls for peaceful protest and denunciation of violence, many Vermont GOP lawmakers voiced support for having Congress or a member of Trump’s cabinet remove him from office.

The president has less than two weeks to go before President-elect Joe Biden will be sworn into office as the 46th president of the United States.