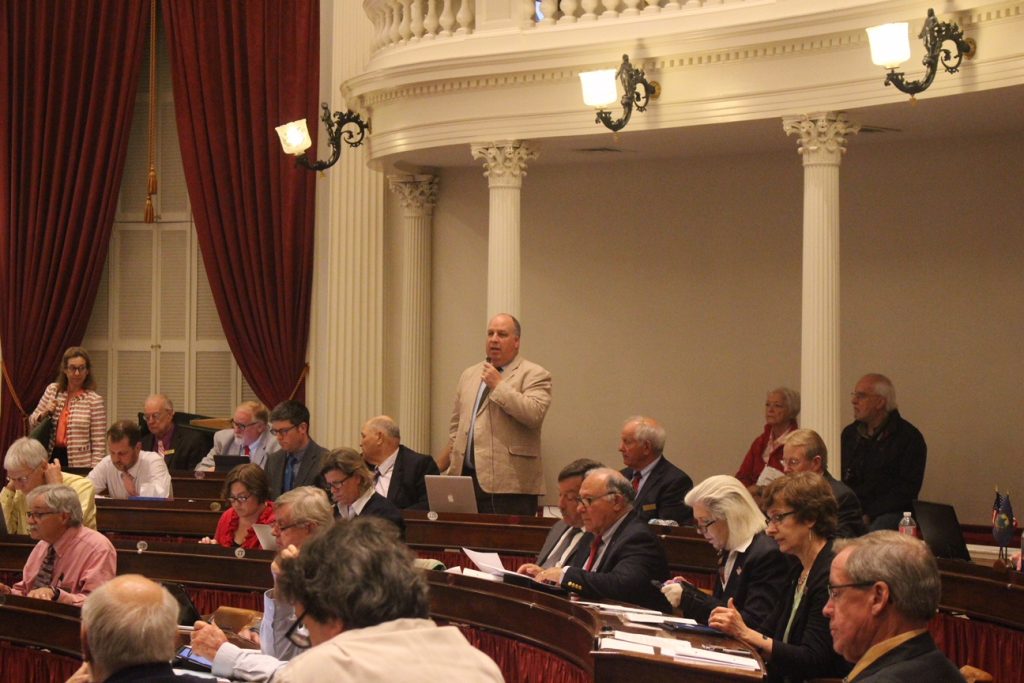 REACHING FOR COMPROMISE – Rep. Scott Beck, R-St. Johnsbury talks about an amendment to the budget which will not raise taxes while attempting to satisfy other initiatives.

MONTPELIER – A budget bill similar to what has already fallen once to Gov. Phil Scott’s veto pen has been passed again out of the House, by an 80-to-43 count, and is headed to the Senate chamber to be taken up on Thursday afternoon.

The governor’s office was quick to issue a statement expressing disappointment.

“In a year where the state has $160 million more in revenue and a surplus that’s expected to grow this month, Governor Scott has been clear he will not sign a budget or tax bill that result in increased taxes, including statewide property tax rates,” Rebecca Kelley, the governor’s spokesperson, said.

Some differences in budget bill H.13 from the one that was already vetoed is that it does not set property tax rates, it does not include cost-containment for education spending, and it does not determine the fate of $34.5 million in surplus funds.

Supporters of this budget say they would like to settle these other matters in another bill, H.4. Critics argue that were H.13 to become law without nonresidential property tax rates set, there could be a default increase of 5.5 cents.

According to Kelley, the governor was willing to listen to other ideas that shared his goal of no new taxes.

“While he continues to advocate for this plan, Governor Scott has also been open to alternatives that achieve these goals. Over the first three weeks of the Legislative special session – called to address this very issue – four options to bring us closer to agreement have been put forward.”

One of those options was considered just before the budget vote. The House considered an amendment by Rep. Scott Beck, R-St. Johnsbury, which deals with education spending. His amendment would create a base spending amount of $13,200 for per-pupil spending, and for every dollar spent over that amount an additional cost would be assessed. The more money spent over the threshold, the higher the percentage of the penalty.

His amendment also would take anticipated additional revenue as tax breaks for school districts that participated in Act 46 mergers, which will phase out over the next four years.

Rep. Janet Ancel, D-Calais, chair of the House Committee on Ways and Means, said they voted against it by a 9-1 vote.

“Our committee has real concerns about the impact on higher spending towns,” she said of the spending threshold.

She also suggested that using one-time money to pay down the tax rate was poor policy.

“Most members feel that if we do use one-time money that we should not be making provisions for paying that back, particularly over a long period of time,” she said.

Rep. Patricia McCoy, R-Rutland, was among the first to comment after the budget vote.

“After two weeks of the special session, we have done nothing to work toward a compromise with the governor,” she said. “We have now passed a bill that does nothing to prevent a government shutdown.

“In fact, passage of this bill continues the two-week trend of spinning our wheels and accomplishing little other than an expected veto. When will we get down to the real business required of us in this special session, that is costing Vermonters tens of thousands of dollars in raising taxes?”

“This is the budget we already passed, setting the controversial bits to the side, so that we can fund the government while we deal with this seemingly intractable issue of funding the school budgets that our communities voted for,” he said.

In the governor’s response to the budget passage through the House, he highlighted other failed amendments that he could have supported but they failed at the Statehouse. One of them was offered by Rep. Cynthia Browning, D-Arlington, which was to put money into paying off Act 46 tax incentives and it holds property taxes flat.

Two others were the “The Minority Compromise” which is a combination of proposals to achieve property tax reform and cost containment, and “The McCoy Amendment” which was similar to Browning’s amendment.