BURLINGTON, Vt. — A public panel discussion held in City Hall’s Contois Auditorium on Tuesday focused on health care costs in Vermont and aired fears about the repeal of Obamacare on Capitol Hill.

The public event attracted a large group of citizens seeking information about the state of health care in Vermont. State Attorney General TJ Donovan, a Democrat, convened the panel because he believes the cost of health care is a consumer protection issue. 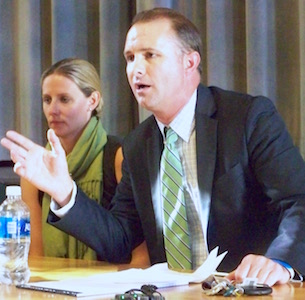 “Consumers should understand what they’re paying (for),” Donovan said.

“Giving consumers and citizens information in plain language that can be understood can empower folks … in this incredibly complex industry called health care. But I want to make it clear there are no easy answers,” he added.

Donovan said that when he first announced the idea of a public panel, he received many encouraging telephone calls about it. He noted that he hopes to host more health care panel discussions in the future.

“I am not different from other Vermonters on this issue,” he said. “I am still confused. I can’t tell you the price of the prescription I get. It changes.”

Nearly all the panelists expressed fear of change in national health care policy under review by the Republican-led Congress in Washington, D.C. But they also acknowledged that the system is broken based on years of quick fixes that now require major reform.

Some problems the panel discussed were unique to Vermont. Among those were the shortage of primary care doctors in rural areas of the state; an “outmoded” fee-for-service payment model; Vermont’s aging demographic, which puts a greater burden of paying for care on younger residents; overcrowded emergency rooms; a need to address mental health at a community-wide level; need for greater civic engagement on health care decision making; and the need to shift focus toward preventive medicine.

In October, the Shumlin administration approved an all-payer model agreement between the Centers for Medicare and Medicaid Services and the Green Mountain Care Board, the goal of which is to control health care spending by changing how providers are paid.

Instead of reimbursing doctors and hospitals for individual services and procedures — the so-called fee-for-service model — the all-payer model lets the Green Mountain Care Board set a global budget for each provider at the beginning of the fiscal year. Providers then care for patients without concern for individual payments.

In February, Gov. Phil Scott announced a trial of the all-payer model for 30,000 Vermont Medicaid patients.

Fisher said the seniors and low income people he serves at Vermont Legal Aid are concerned about losing coverage.

“I hear these folks calling our office,” he said. “They are in a panic about how they are going to get care. Many of them are insured but they discover when it’s too late that they are under insured.”

As a former legislator, Fisher certainly has broad policy experience. He chaired the House Health Care Committee and was vice chair of the House Human Services Committee. He takes credit for passing legislation that reduced Vermont’s uninsured rate from 7 percent to 3 percent by expanding Medicaid. He also helped create the Green Mountain Care Board during his time in the Legislature.

Nearly all the panelists supported a big government approach to fixing rising health care costs. Several panelists blamed pharmaceutical companies for rising costs, yet little was said about the rising cost of drug research and development, now estimated at more than $2.5 billion per drug.

Panelists also said little about the impending financial collapse of Obamacare, as noted by health insurance giants like Aetna, Humana, and UnitedHealthcare, which have abandoned Obamacare exchanges to prevent continued massive annual losses.

RELATED: Obamacare is in a ‘death spiral,’ says Aetna CEO

In October, the Department of Health and Human Services announced that insurance premiums of health plans obtained through Obamacare exchanges would rise an average of 25 percent in 2017. The cost is much higher in some states, including a 116 percent average increase in Arizona.

While Obamacare Medicaid expansion has significantly reduced the number of uninsured Americans, adding millions of non-paying customers to the health care welfare net has proved more expensive than anyone imagined. Meanwhile young people have opted to pay an IRS fine rather than buy health insurance.

Olson, who leads the Vermont Visiting Nurses Associations, suggested the need for a different approach to health care — greater initiative on the part of health care consumers.

“There’s no substitute for being an advocate for your own care or for the people you love,” she said. “That’s what you can do right now; providers welcome that. We always talk about a patient-centered system, and that’s something you can do right now to manage your health care concerns.”