Vermont Daily asked the governor, “Can you assure Vermonters that if protesters try to establish a police-free autonomous zone in Vermont, per Capitol Hill in Seattle, that you will stop it promptly and decisively, and if so how?” Scott said he had not heard of this development, and then passed the question to Schirling. He, too, said he is unaware. 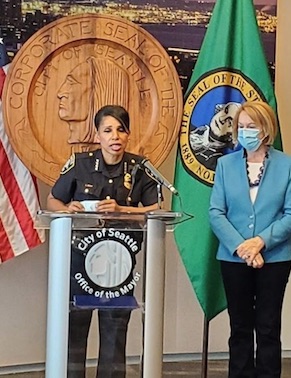 The CHAZ has been a lead story for several days on many major media outlets. Vermont’s two most senior law enforcement officers repeated that they know nothing about it. Schirling affirmed he has been focusing on Vermont’s problems.

Scott has often referenced civic unrest across the country, comparing it unfavorably to peaceful protests here. His unawareness, and Schirling’s, suggests that Vermont’s official response to a similar takeover in Vermont would be starting from scratch.

According to the Seattle Times, police vacated the area on Monday and protesters immediately set up their own barriers and pronounced it a police-free zone.

The New York Times and Fox News have covered the story for at least two days. NPR, NBC and CNN also covered it yesterday. The takeover was the subject of a well-publicized tweet Wednesday by President Donald Trump.

This gubernatorial ignorance of the usurpation of lawful police authority in Seattle is not unique. When asked about the takeover Wednesday afternoon, Washington Governor Jay Inslee professed ignorance — despite the fact that it had begun on Monday and occurred in his state’s largest city, and had already become a nationally-trending story on Twitter and other media. “That’s news to me,” Inslee said.

“Leaving the precinct was not my decision,” Police Chief Carmen Best said in a YouTube message to her fellow officers Wednesday. “You fought for days to protect it. Ultimately the city had other plans for the building and yielded to public protest.” The chief also said she has heard reports that CHAZ representatives are asking residents for money and are asking to see identification.

In other protest-related news, Gov. Scott was asked by Brittany Weir of Fox 44 about his approval of the city of Montpelier’s decision yesterday to paint  “Black Lives Matter” in large letters on State Street in front of the State House. “I don’t want this to be just a moment in time,” he said. “I want it to be a transition to action. … To put it in front of the State House we are making a positive statement ourselves. We’re in this for the long run. We’re going to change things.”