The chair of the Vermont Republican Party says party leadership will stand by and let Vermonters choose whether to support a primary challenger against Gov. Phil Scott for the 2020 gubernatorial election.

“When there are primaries, we, as a rule, stand down and then get behind whoever comes forward from the primary,” Deb Billado told True North in an interview. “The concept is that the Vermont Republican Party will support Republican candidates.”

Republicans in the state face a peculiar situation going into the upcoming election. While polls suggest Scott is one of the most popular governors in the nation, his base within Vermont has been unhappy with his stances on gun control, sanctuary cities, abortion and racism claims. 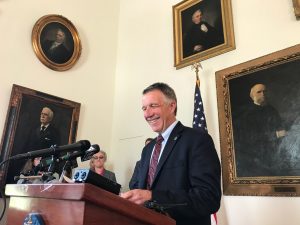 WALKING THE TIGHT ROPE: Gov. Phil Scott has gained ground with liberals in Vermont, but that has cost him support with his Republican base.

According to Morning Consult’s governor approval rankings, Scott is more popular with the opposition party than his own. As of the second quarter of 2019, his net approval rating is plus 56 percent (meaning 56 percent more approve than disapprove) with Democrats. His net approval with Republicans is plus 15 percent.

Billado, the leader of the Vermont GOP, has been an outspoken supporter of the current head of the Republican Party, President Donald Trump. The Rasmussen Reports daily presidential tracking poll has the president hovering at around a 50% approval rating nationwide. Billado’s support stands in sharp contrast to Scott, who was the first GOP governor to support an impeachment inquiry into the president.

Billado says she’s upset about the amount of flack the president gets despite his accomplishments, especially his role in fostering a roaring economy. She noted that state politicians and commentators rarely give the president any credit for Vermont’s budget surpluses.

“I don’t know the numbers off the top of my head, but I’ve heard them and they are staggering,” she said. “Vermont has seen some of the overflow of the wealth that has been created across the nation through the Trump efforts, and again, it’s something that I think isn’t talked about often enough.”

She also warned against listening to Trump’s critics on social media.

“I know that there is a lot of chatter on social media, but you have to remember that often the people on social media — right or wrong — are the louder voices. And then there’s this huge silent group that is sitting in the wings that will make their decisions on election day.”

Rep. Patricia McCoy, R-Poultney, the minority leader for the Vermont House of Representatives, says she doesn’t think a primary against Scott would be a good idea.

“I have not heard of one, but my personal feelings on having a primary are it would certainly detract from the real issues facing Vermonters at this point, which are affordability for working young families, our changing demographics, which are huge, and economic development,” she said.

McCoy also noted that a lot of money could end up being spent in a primary, which wouldn’t help the GOP for the general election. She added that Scott still holds a strong record on the economy.

McCoy said the linchpin for Scott is the economic development factor: “We’ve made pretty good strides in the last four years on those issues right there.”

Regarding conservatives who are annoyed with Scott for his attacks on the president, or for signing unpopular bills such as protection for full-term abortions or gun restrictions in 2018, she said Scott needs to be judged in a broad context.

“I don’t always agree with everything everybody does as a politician. … You have to learn to pick your battles and decide for the common good of the state. Are the goals that the governor is trying to attain the goals that we should be laser-focused on? In my opinion, they are.”

Mary Beerworth, director of Vermont Right to Life, says she is disappointed with Scott’s signature on H.57, which states no public institution can interfere with a woman’s decision to have an abortion through all nine months of pregnancy. In addition, Scott backed giving $800,000 in state funds to support Planned Parenthood after the abortion industry giant refused to comply with federal law requiring clinics to separate their family planning and abortion services.

“There was a lot of tolerance for Phil Scott among conservatives who would have gone further to the right, but I think that it’s just worn itself out,” Beerworth said. “From what I’m hearing, there’s a lot of people who woke up when they realized what was happening in the Statehouse that have been maybe sleepy on issues like abortion.”

Senate Minority Leader Joe Benning, R-Caledonia, said he disagrees with Scott on guns and abortion but still sees the value of having a Republican in the governor’s seat.

“There are a lot of people who are very passionate about specific issues,” he told True North. “I disagreed with Phil on the gun bill and I disagreed with him on H.57, but a Republican at the highest state position is very important to me, and I know that Phil Scott believes the same way I do about the need for Vermont to have a strong economy, and to do what we can to get people working in decent jobs, and to improve our infrastructure.

Benning added that while he may disagree with Scott on specific issues, he does not want to “throw the baby out with the bathwater.”

On Twitter, state Rep. Heidi Scheuermann, R-Stowe, recently weighed in on the debate over Scott’s support among Republicans. She noted that Scott represents the only foothold that conservatives maintain at the statewide level.

Hogwash! https://t.co/3XZ5zuSA6i @GovPhilScott has been elected twice because VTers support him. It's that simple. If VT Republicans primary him out of his job, we lose the only statewide office we hold. I guarantee it. #vtpoli #ideologicalpurityisnottheansweritistheproblem https://t.co/y3PzRhejLV