The Vermont Republican Party held a meeting Saturday with Tommy Hicks, the Republican National Committee’s co-chair since 2019, who spoke on the need to get more representation in state government and push for election integrity measures.

“The polls show the American people overwhelmingly are with us — 80 percent of the American people support voter ID, they see through the lies of the Democrats and their partners in the mainstream media and big tech and it’s spreading,” Hicks told the audience. 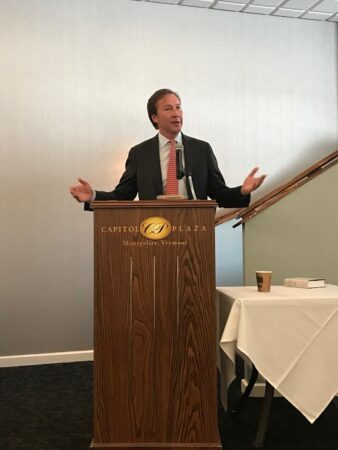 As support, he pointed to the recent U.S. Supreme Court decision that upheld Arizona’s ban on ballot harvesting.

“It’s one of the most corrupt practices in politics today. This case was a win for the Constitution because it clearly states that the states, not the federal government, can control their election policy,” he said.

Hicks appeared to be referencing a federal bill, HR.1, that if approved would override state voter-identification requirements, create lax mail-in voting procedures, and lay the groundwork for an election system with few security features.

Another priority topic on Hicks’ list was recruitment of candidates, especially in Vermont, where both chambers in the General Assembly lack the votes to sustain a veto by Gov. Phil Scott.

“I don’t mean to beat a dead horse here, [but] we are the party of opportunity and we protect Americans’ values, and the Democrats have been hijacked by the radical left,” he said. “So each conversation that everybody in this room has to recruit somebody into our party is going to end up benefiting our children’s and our grandchildren’s future because we will still have a republic.”

“We’re paying more for everything because Democrats are paying people not to work and they are blowing out the national deficit to do it,” he said. “So the results are, effectively, a tax increase on all of us, on all working families who are already taxed enough.”

Deb Billado, chairwoman of the Vermont GOP, said at the meeting that legal action will be taken against the cities of Winooski and Montpelier for charter changes that allow noncitizen voting.

“For people’s information, we’re not sitting still on that particular issue. We believe that it goes directly against the Vermont State Constitution section 42 and we are moving forward with legal action,” Billado said.

Wendy Wilton, the former director of the U.S. Farm Service Agency in Vermont under President Trump, proposed a resolution that passed unanimously banning the use of vaccine passports for any travel or other services in Vermont.

“My concern is about rights and about privacy — your medical privacy, our rights as individuals — and never before have we required someone in our history, have we ever had someone show proof of vaccination to be a citizen in this country,” she said.