A national workplace benefits organization has issued a report card on which states are expanding paid family leave benefits, but some members of Vermont’s business community say the assessment is more about political agendas than what really works for businesses and employees.

This year marks 25 years since the federal government passed the Family and Medical Leave Act. To see how the federal law has affected paid leave programs, the National Partnership for Women & Families has released its report on all 50 states and Washington, D.C.

The report, titled “Raising Expectations: A State-by-State Analysis of Laws That Help Working Family Caregivers,” states that “half of the country has failed to meaningfully expand on FMLA’s baseline protection of unpaid leave.” While no state got an “A,” six states got an “A-” and Vermont received a “B” grade. 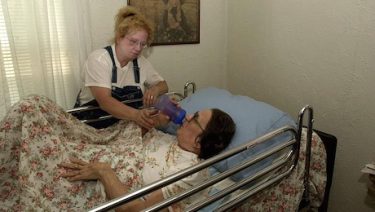 NOT ENOUGH PAID LEAVE?: The National Partnership for Women & Families says Vermont needs more paid-leave programs, but employers say that will cost businesses and employees in the long run.

“Half the states are doing little or nothing beyond what federal law requires to ensure that workers don’t have to risk their pay or their jobs when they need time off to care for a new child or a sick family member, recover from illness, or seek health care services,” the group stated in a press release.

“Access to paid leave should not depend on where we live or work or what job we hold. Public demand for paid leave solutions is high, and lawmakers on both sides of the political aisle are taking notice,” she said.

Shabo urged Congress and state lawmakers to adopt additional paid leave policies “that benefit all workers, families and businesses while strengthening our economy.”

Some in the business community, however, disagree with this assessment. Vermont, in particular, has a high percentage of small businesses. Earlier this year the state’s Joint Fiscal Office reported that about 90 percent of employers have 20 or fewer staff.

According to William Moore, president of the Central Vermont Chamber of Commerce, mandating paid-leave programs causes more harm than good. After reviewing the report, he said he thinks National Partnership for Women & Families is merely grading states on how far each has gone in advancing its agenda.

“And the agenda is for somebody else to pay for everything that I want,” Moore said.

Vermont’s latest paid-leave proposal was designed to be paid for only by employees, not employers. Under this scenario, some employees may have children, illnesses, or family illnesses to tend to while others may never see one day off from their investment in these programs. Moore said at the end of the business year, someone who did not use their time off could face strong temptation to grab a handful of “sick days” before they expire.

“There’s nothing to stop you other than the employer being able to ask to provide a doctor’s certificate that you were actually out sick,” he said. ” … The potential for abuse is phenomenal.”

He added that any time workers take time off, no matter the reason, the cost is more than just the paid-leave investment.

“Employers then have to look at filling the gap while you are gone,” he said. “Even if the tax picks up the cost of the paid-leave, they are also hiring temporary employees to come in or you are also paying overtime or extra for the employees that are currently there.”

Another concern, Moore said, is that there may not be enough employee revenue to offset the full potential expenditures. “Sooner or later they are gonna come around and ask to tax the business community.”

Erin Sigrist, president of the Vermont Retail & Grocers Association, agrees that paid family leave mandates are bad for business. For one thing, she doesn’t believe the Family and Medical Leave Act authors did all their homework.

“Studying state laws and regulations rather than the relationships between employers and employees prevents a firm understanding of the business landscape here in Vermont,” Sigrist said. “More than 90 percent of Vermont’s businesses are considered small businesses. And they serve as stewards in every community across Vermont.

According to Sigrist, the capacity to provide mandated benefits such as paid family leave is greatly reduced for many small businesses, and they must be creative when it comes to providing benefits because of their low margins. She said most retailers’ margins average about 3 to 4 percent, while food retailers and grocery store margins are even tighter — averaging 1.5 to 3 percent.

Vermont Retail & Grocers Association has polled its members extensively on all the different benefits that they offer to employers, including paid leave, health insurance, training, and more.

“During the last legislative session, VRGA expressed significant concerns about the proposed creation of a family leave fund,” Sigrist said. “A top concern is that it will prove to be unsustainable. Other concerns include greater staffing issues in an already tight employment market, and that it will mandate benefits, which not only eliminates competition between employers to attract employees, but also increases the likelihood of staff reductions, automation, elimination of other benefits, or shorter or fewer operations hours.”

She said such developments would ultimately result in less money in employees’ paychecks, or the loss of work positions altogether.

“Ultimately, mandating unsustainable benefits is a disservice to employees and employers alike,” she said.