At the start of both a new year and a new decade, Vermont’s future looks uncertain as its resident population ages, young people scatter out of state, and few businesses of consequence are being lured to the Green Mountain State.

At a unique discussion held at the Counseling Service of Addison County in Middlebury late last year, experts gathered to present what has been described by some state leaders as a “seismic shift” in demographics.

One presentation in particular illustrated the profound impact the shift is having on schools, businesses, service providers, the state and local tax base, and other economic and social structures in Vermont.

Rachel Cummings, executive director of the Counseling Service of Addison County, introduced well-known economist Art Woolf to the podium, and acknowledged that the United Way and Addison County Economic Development Corporation worked together for months to have him visit to present an unbiased “state of the state” report for community leaders.

“We are feeling this shift acutely here,” Cummings told the audience. “Within our employee makeup, 36 percent of our full-time staff is age 55 and older, and about 8 percent is 65 and older. Those 65 and older make up about a quarter of our staff.

“Our clients are aging, too. We’re noticing a drop in the kids were serving … the population we’re serving is getting older. So, we have to think about how we recruit, how we maintain staff, and how we attract people to come here and stay here.”

For the next two hours, Woolf laid out his data and said that Vermont is demographically different when compared to 49 other states. 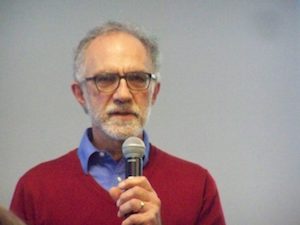 Economist Art Woolf: “In 2018, there were fewer births in Vermont than in 1859. That’s pretty dramatic.”

“I’ve been looking at this demographic (problem) for the last 15 years,” he said. “I was the lone voice in the crowd starting in the 2000s when I realized what was going on. But this is no longer big news; everybody knows Vermont is an aging state. However, the questions now are what does it mean, what are causes and consequences, and is there anything we can do about it. That’s what I am focusing on.”

Woolf said that from the early and mid-1800s to the 1950s, Vermont had almost no change in its population. But by the middle of the 20th century, things began to change.

“Beginning in the 1960s, Vermont’s population started to grow,” Woolf said. “It continued through the 1990s (and then stopped). And that was our experience, that things were normal. But there was a long period of stagnation that preceded that recent growth.”

In a sense, Vermont’s growth from the 1960s to the 1990s was an aberration, Woolf added, because the state’s population hasn’t grown since the year 2000.

“In the 2010 census we were growing at about one third of the rate of the United States. We were very different from the U.S., but then, from the 1960s to the 1990s, we looked like the rest of the U.S.,” he said. “Thus, Vermonters began to think that growth was normal. Many grew up when Vermont was like the rest of the U.S. — they didn’t have the (collective) memory of a time when Vermont was stagnant, wasn’t growing. That’s because people back then were moving out of state.”

To put today’s demographic shift in perspective, Vermont’s biggest export during the 1800s was its people, he said.

“Things were better elsewhere in the 1800s — fertility rates were normal, women were still having babies. But why would you want to farm, say, in Washington County (Vermont) when there’s Ohio out there? Yes, the winters are long in Ohio, but much of that state has pretty rich top soil without moving a lot of rocks. So, you can actually trace the Vermont population’s westward move with all the new towns being named after the Vermont towns they left.” 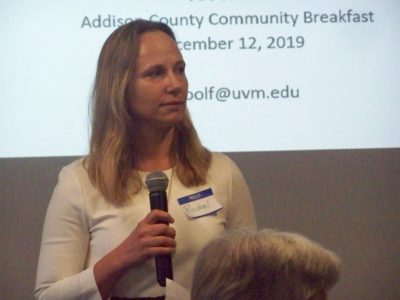 Rachel Cummings: “We are feeling this shift acutely here. Within our employee makeup, 36 percent of our full-time staff is age 55 and older, and about 8 percent is 65 and older. Those 65 and older make up about a quarter of our staff. Our clients are aging, too.”

Vermont’s mid- to late-20th century growth spurt was a short-lived phenomena; so, don’t expect it to occur in the future, he said. The short decades of growth experienced in the memories of many older, living Vermonters will simply not return.

Systemically, a large part of Vermont’s recent stagnation has less to do about high taxes and regulations and more with its unusually low millennial generation birth rate and soon-to-expand baby boomer generation death rate.

“In Vermont, births went up in the 1980s, but then it’s been at zero. You are not going to get any population increase here through births,” Woolf said.

“The baby boomers had a lot of babies, but the big change came with the children of the baby boomers. … In the middle of the millennial generation, births in Vermont started plummeting and stayed down. In 2018, there were fewer births in Vermont than in 1859. That’s pretty dramatic. So, think about baby girls born in 1980; they were 30 years old by 2010. By the 2000s there are fewer births; so, there were fewer births 30 years later when these females were in their child-bearing years. Births are going down, deaths are going up. Since 2010, births are going down and deaths (are similar). … But when the oldest baby boomers now in their 70s start dying, the number of deaths will go up — clearly. And births will be going down in the next 20 and 30 years.”

With no natural increase in population and low immigration in Vermont, at least compared to the rest of America, Woolf doesn’t see a way out of Vermont’s demographic and economic stagnation.

“The profile of immigrants in Vermont is very different from the rest of the nation. Most of our immigrants historically come from Canada. But an increase in immigration will have to be one of the solutions with our low birth rate,” he said.

Woolf offered no definitive solutions to Vermont’s demographic crisis. While he believes that taxes are high and growth will be essential despite strong, partisan political opposition to it, attitudes must change from the State House to Main Street.

Without increased immigration, he noted, the local population alone will not increase the workforce and tax base. Thus current tax and other public policies will have to change along with a new “attitude of growth” if Vermont is to stop its downward death spiral.

“We have to change people’s attitudes,” Woolf said. “People (in Vermont) often have a negative opinion about growth, but if you ask them ‘do you think your income should go up in the future?’ who would ever say no? Well, that’s what growth is — it allows all of us to have a rising standard of living. To get to the solution, first we have to acknowledge there’s a problem. That’s why I believe economic growth is a good thing.”

Lou Varricchio is a freelance reporter for True North Reports.

20 thoughts on “Vermont facing a ‘seismic shift’ in state as birth rate crashes, deaths on the rise”