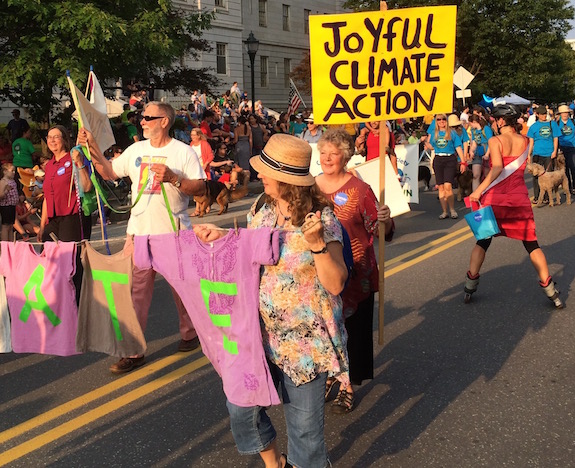 Efforts for a reduction in carbon-based energy usage have for the most part been focused on the Statehouse, but on Town Meeting Day many communities across Vermont pledged to embrace environmental action at the local level.

In all, 35 towns voted on on resolutions that pledged to pursue policy goals aimed at prohibiting development of carbon-energy infrastructure while embracing renewables.

Maeve McBride, director of 350Vermont, the environmentalist group behind the statewide effort, confirmed that the resolutions passed in every town. “[The] towns approved of it, in all of the towns that it was on the ballot, pretty much by a landslide,” she said.

Carl Russell, chair of the Bethel Selectboard, said the resolution was overwhelmingly popular with voters. “There was a mostly unanimous vote in favor,” he said, adding that no one spoke against the measure, even though a few points may have been contentious for some voters.

According to the language from the original pledge, each town would commit to the following:

a. Halt any new or expanded fossil fuel infrastructure, including but not limited to energy pipelines;
b. Firmly commit to at least 90% renewable energy for all people in Vermont, with firm interim deadlines; and,
c. Ensure that the transition to renewable energy is fair and equitable for all
residents, with no harm to marginalized groups or rural communities.

Each town was free to add or change the language to fit their local interests.

350Vermont and other like-minded groups argue that carbon emissions are causing erratic temperatures, severe storms, a spread of tick-borne diseases and other threats to maple sugar makers and farmers.

Jaiel Pulskamp, field organizer for 350 Vermont, told True North ahead of the election that “it will pass pretty easy in most of the towns.” However, she said there is “resistance to the no-new fossil fuels” concept, and “people aren’t quite sure they want to move off natural gas.”

She said she hopes towns will work with their selectboards and planning commissions to invest in projects such as solar panels on schools, weatherization of old buildings, heat pumps in homes and ridesharing and public transportation developments. At the state level, she said she is in favor of H.746, which calls for no new fossil fuel infrastructure.

Other Vermonters aren’t so sure about the push, saying there’s a financial cost to going green to the extreme. State Rep. Warren Van Wyck, R-Ferrisburgh, a member of the House Energy and Technology Committee, has noted that wind and solar projects on average cost around two-fold the regular market price of power.

Asked about the higher costs of renewables versus carbon-based energy, Pulskamp said “we have to look at the true costs,” and she referenced Hurricane Irene and big storms of 2017. “We’re all going to be affected through our pocketbooks.”

She added that she prefers that communities focus on rooftop solar and “brown sites” that don’t hold high value in a community.

Russell said that Bethel’s energy committee is working on an energy plan that conforms to the standards of Act 174, the state’s renewable energy siting law. He said the community currently has commercial-scale renewable energy development, not industrial-scale, which spurs the most opposition.

“We do have a lot of pushback in our town about that kind of development,” Russell said. “… People are definitely serious about making sure that we have prudent development of commercial-scale solar and wind.

“We want it to happen but, the main thing is there’s been some pushback about the fact that if a project is of a certain scale, the only review is by the [Vermont Public Utility Commission] and then our zoning and other development review is insignificant.”

Pulskamp also acknowledged issues with industrial wind turbines, such as environmental impacts and sound pollution. But she said carbon-based energy sources, such as natural gas and coal, have their own pollution issues.

She said Vermont should can look to Europe as model for how green energy can be done aggressively and done right.

Germany has been unable to meet its global warming goals despite $800 billion investment in green energy, and in Denmark, 66 percent of Danes’ electric bills goes to paying green taxes and fees while only 15 percent goes to pay for the electricity generated.