The Vermont Arts Council is sounding off on how the economic crisis associated with the coronavirus lockdown has devastated the state’s artists and creative workers, stripping them of $195 million in revenue in 2020.

That’s the bleak reality, according to a data sheet from Americans for the Arts tweeted out last week by the council.

Karen Mittelman, director of the Vermont Arts Council, told True North that concern about the global pandemic and the need for public safety has had a social and economic impact on entire communities.

Indeed, individuals who attend art and live entertainment don’t just pay for tickets. They spend an average of $31.47 on related items, including meals, parking, souvenirs, lodging, local transportation and more. That’s money that is no longer being spent in cities and towns across Vermont. 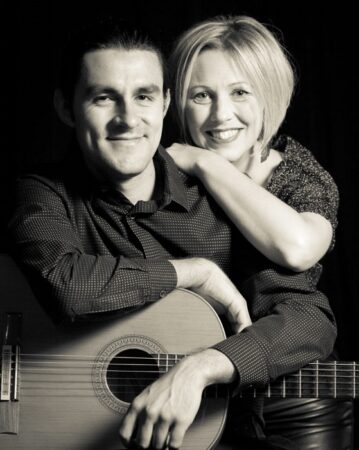 THE SHOW MUST GO ON: Sarah Cullins of the 8 Cuerdas Duo says there are very few live-music events in Vermont. She is pictured with husband guitar player Daniel Gaviria.

Musical entertainers 8 Cuerdas Duo recently moved to Burlington from the Andes Mountains of Bogota, Colombia, where the performers had careers as soloists, chamber musicians and educators.

Sarah Cullins, who sings soprano for the husband-wife team, said their work has been wiped out by the economic crisis.

“I mean it’s just been completely decimated as you can imagine,” Cullins said. ” … I’ve had operas and other concerts canceled, everything.”

She said there are currently few opportunities for public performances in Vermont.

“Every single theater is closed in Vermont so there are not live performances happening,” she said. “There have been virtual opportunities, with sort of hopeful pay, which doesn’t often come through.”

As with other service industries, such as restaurants and gyms, entertainment venues and art galleries are forced to operate at limited capacity, as well as follow mask mandates and physical distancing. Taking the show online isn’t a true solution, according to Cullins.

“One of the ironies is that there’s now so much content online. If you are an opera buff you can watch a net opera every week online in ways that you never could before,” she said. “I think people are even less willing to be paying for things online where there is so much content and you can watch online all day — so those opportunities aren’t really panning out.”

Cullins said other countries are open for business.

Mittelman said the industry is looking for ways to continue producing content.

However, Mittelman says artists continue to struggle financially despite their many creative ideas for how to perform amid the pandemic.

“It is really tough to monetize,” she said. “Artists are literally reinventing themselves, and cultural organizations are trying to come up with business models that will work — but none of this is financially stable. Even if you can charge like, what is it, $10 for an online event, it’s not going to pay your fees for the artist and the sound engineers and the digital technologies to stream the concerts and all the other costs. It’s not financially sustainable.”

Mittelman said with summer ahead, people will be ready to get back to normal living.

“In the spring and summer, there is so much pent up hunger for the arts and culture and for people to hear live music again and be together,” she said. “[Vermonters want to] be able to be at a street festival watching live music, watching a dance performance, going to the movies again.”

CLARIFICATION: The original version of this article emphasized the impact of the state’s economic policies when characterizing the views of Vermont Arts Council Director Karen Mittelman. At the request of Vermont Arts Council spokeswoman Catherine Crawley, the article was updated on Feb. 6 to emphasize Mittleman’s focus on public health and safety.