A new study based on data from the Healthcare Cost Institute found that Vermonters spend the 12th highest amount on heath care relative to residents of other states.

According to the report by the consumer website The Senior List, Vermont residents spend an average $6,103 per year on health care, about $500 over the national average of $5,640.

Topping the list was Alaska, where residents pay $7,469 on average. Residents of Hawaii were found to pay the least — just $3,626. 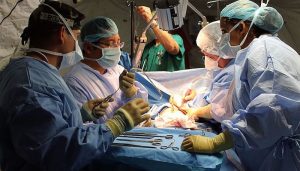 HEALTH CARE COSTS: Vermont ranks in the top quarter of the nation for health care costs, according to a new report.

Almost half all Vermont’s health care spending is considered “professional services.” This relates to care such as anesthesia, specialist visits and surgical services, according to the report.

One factor playing a role in Vermont’s high ranking is the state’s aging population. As of 2017, the median age in Vermont is 43 years old, which is five years older than the national median age of 38.

One observation from the study’s authors is that there does not appear to be any “Red State-Blue State delineation in the data.” The high-cost and low-cost states do not follow any clear pattern regarding the dominant political party.

There does seem to some patterns regarding location, however, especially in the Northeast. While Vermont ranks 12th, New York State ranks 8th, spending at $6,335 per household per year. New Hampshire ranks 4th at $6,720, and Connecticut ranks 10th at $6,232. The report ranks Maine 15th, with an average household spend of $5,993 per year.

Also according to the report, health care spending nationwide is up 17 percent since 2013. Americans are spending $3.5 trillion each year, or 18 percent of the total gross domestic product. The primary culprit for the national increase in spending is prescription drugs, the cost of which has risen 29 percent since 2013.

Since the year 2000, total healthcare spending is up 150 percent.

The report states that when all variables are considered, “there’s no doubt that health care is simply getting more expensive in the U.S. than it was in the past, even accounting for the population and economic changes that have taken place in the past two decades.”

The study concludes that, ultimately, Americans don’t have a lot of choices when it comes to healthcare.

“In the case of an emergency, we don’t want to worry about how much it will cost to save our life or the life of a loved one,” it states. “But the truth is that cost does matter because our economy (and the rest of us) are spending an incredible amount on healthcare with seemingly no end in sight.”

Dr. Louis Meyers, a Vermont physician from Burlington, told True North that monopolies at big hospitals such as UVM Medical Center and Dartmouth Hospital are behind the rising costs.

“They have the power to demand and receive higher prices for their services than the independent hospitals,” he said.

Meyers added that even simple practices such as blood tests at a lab — the kinds of services that don’t vary much in quality from one provider to the next — can routinely cost up to “two-to-three times” at those big hospitals.

“When you factor that in, you can see the immense increased to health insurance and consumers,” he said. “That’s partly what’s driving up the premiums and deductibles.”

Meyers said he thinks one step in the right direction would be for Vermont’s health care committees to include lawmakers who have medical expertise.

Images courtesy of Public domain and U.S. Department of Defense