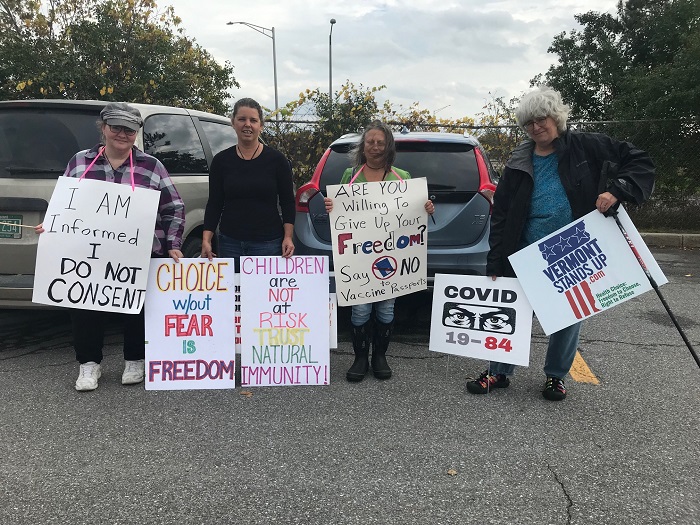 STANDING FOR VACCINE CHOICE: About 100 rally-goers came to Williston Road in South Burlington on Saturday to speak out against COVID mandates and forced medical procedures.

About 100 attendees of a freedom rally on Saturday marched along Williston Road in South Burlington, holding signs that spoke for the rights of individuals to choose whether or not to get vaccinated.

“There are a ton of people who took the shot and they find out that somebody else got hurt, and they start asking questions about that,” Jennifer Stella, an organizer from Vermonters for Vaccine Choice, told True North. “And then they say, ‘Well, the same thing happened to me but my doctor said it wasn’t the shot,’ and so there’s this immediate denial going on in the profession itself.”

Stella said people need to speak out more when they suspect they have had a reaction to a vaccine.

“The best thing to do is to be part of the conversation, to speak your mind in a really respectful and caring, intelligent way, because we are all in this together, and at the end of the day mandates hurt people,” she said. “They are hurting people’s health, people are losing their jobs, and others are taking the shots in order to keep their jobs, and then they are being crippled.” 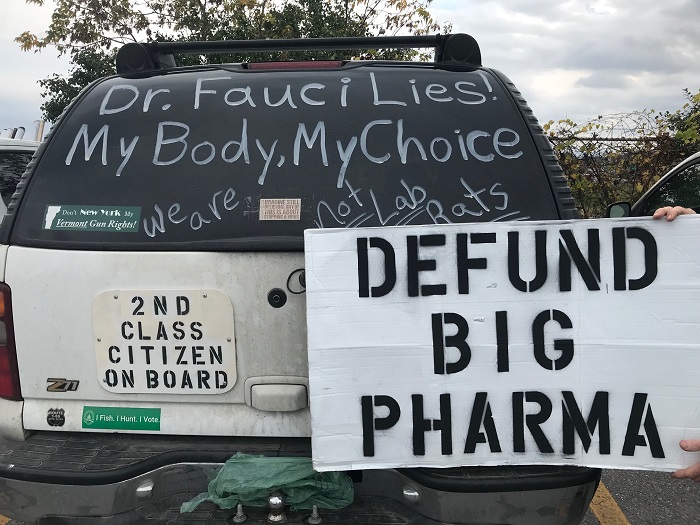 At the national level, concerns about vaccine reactions have been strong enough to provoke massive work shortages in several key industries. More than 3,000 Chicago police officers are refusing their vaccine mandate, leading to a one-third reduction in the Chicago police force, and 150 nurses were fired from one Houston area hospital after they refused to get mandated COVID vaccines.

Vaccine efficacy is also in the news this week as Colin Powell, a former four-star general and the first black U.S. secretary of state, died Monday of complications related to COVID-19 despite being fully up-to-date with recommended COVID-19 vaccinations.

At Saturday’s event, Wade Chivington, a resident of Waterville, told True North that one of his concerns is the COVID-19 shots don’t work like most conventional vaccines.

“It makes your DNA produce a spike protein that simulates the virus and then your immune system responds to that spike protein,” Chivington said.

Kathi Tarrant, a resident of Waterbury, explained that the vaccination subject is causing divisions between people, but that most people don’t like the idea of coercive mandates.

“Even my daughter who is a nurse says that they shouldn’t be forcing it on people,” she said. “At least we can agree on that point.”

Christian McCrory from Randolph said that for him it’s about a matter of choice.

“I think it’s basically about choice — the freedom to choose what to do with your body is what it comes down to,” Rewinski said.

Robert Pettersen of Burlington said, “For me, it is about bodily choice and bodily autonomy. We don’t need to get religious.”

Stella said coercion is used to push the vaccines, especially in the workplace.

“To have to take an experimental gene therapy to keep your job, to feed your family, to pay your bills, it’s completely unjust,” she said. “We’ve always been about the freedom to choose.”

She added that safety is discarded when mandates are enacted.

“They could say to you tomorrow, ‘This shot is full of poison and may kill you.’ And if you are not allowed to say no, what’s the point?” she said.