“Groupthink is the enemy of rigor … what we define to be excellence has become captive to a certain political agenda,” says Brown University economics professor Glenn Loury.

Yet, in the name of “eliminating systemic racism,” Sunrise Park Middle School in White Bear Lake, Minnesota, near St. Paul, will no longer hand out “F” grades to students who turn in the lowest quality work. The school has simply lopped-off 0–49.9 percentiles in its grading system.

The new grading system will no longer reflect student behavior or tardiness, or whether an assignment was completed on time. Grading, the school’s website reads, perpetuates systemic racism. 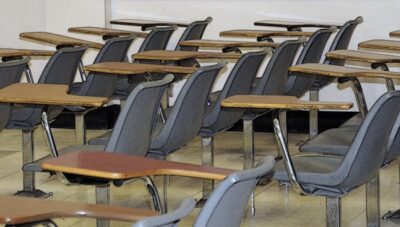 As a result of the outcome of a settlement agreement, the University of California System’s board of regents is abandoning the SAT and ACT. The lawsuit had claimed that the tests were biased against minority and low-income students. Not to be outdone, Oregon lawmakers followed suit shortly thereafter, eliminating math and reading skills testing requirements.

Sounds benign enough, but equity audits align with the tenets of Critical Race Theory, which holds that any disparities in student outcomes are a result of discrimination.

These audits have come in conjunction with growth in Chief Diversity Officers (CDOs) in K-12 schools and their Diversity, Equity, and Inclusion (DEI) brethren in higher education.

Sunrise Park Middle School is not alone in abandoning failing grades. This everyone-gets-a-trophy approach to education is also found in high-school math curriculum and the phase-out of college entrance exams—all in the name of “equity.”

The “math equity toolkit” explains that getting the right answer, teacher “control over the classroom,” and students being required to “show their work,” are all evidence of how math classrooms maintain “white supremacy.”

As a result of the outcome of a settlement agreement, the University of California System’s board of regents is abandoning the SAT and ACT. The lawsuit had claimed that the tests were biased against minority and low-income students.

Not to be outdone, Oregon lawmakers followed suit shortly thereafter, eliminating math and reading skills testing requirements for graduation. As with California, the new law is in service to “more equitable graduation requirements.”

“Grade inflation is a horrible corruption,” Loury says. In the case of eliminating “Fs” at Sunrise Park Middle School, this inflation does nothing to help struggling students. It simply masks areas where they may struggle academically, advancing them when they’re unprepared for more rigorous work.

Florida abolished this practice, frequently referred to as social promotion, in the early 2000s to great effect. Instead of promoting students to the fourth grade when they couldn’t read proficiently, for example, Florida began requiring students to pass a third grade reading test before advancing to fourth grade.

In a study of Florida’s retention policy, researchers Marcus Winters and Jay P. Greene found that “students lacking in basic skills who are socially promoted appear to fall farther behind over time, whereas retained students appear to be able to catch up on the skills they are lacking.”

Indeed, in the wake of Florida’s end to social promotion, along with its robust embrace of school choice, black students’ reading scores soared, increasing 25 percentage points on the National Assessment of Educational Progress (NAEP). That was double the progress of black students nationally, whose reading scores improved 12 points during that time. Minority students in Florida began closing achievement gaps, tying or outscoring the statewide reading averages for all students in a number of states.

The end to social promotion in Florida played a role in these gains, but school choice was as—if not likely more—consequential in catalyzing improvements. The Sunshine State launched its tax credit scholarship program in 2001, and now enrolls more than 100,000 participating students. Those students, largely from lower-income families, are able to attend a private school of choice that fits their learning needs.

And today, Florida is also home to one of seven innovative education savings account (ESA) programs in the country, enabling families to use their child’s share of public school funding to craft a completely customized education for their child.

Florida’s successful approach was the opposite of what woke districts like White Bear Lake are pursuing. As Pelham Union, New York school board member Ian Rowe writes, “‘equitable outcomes for everyone’ runs directly counter to the proper aim that each student ‘achieves their full potential in life’.”

Instead of lowering expectations for students through measures like eliminating “F” grades, states and local school districts should pursue policies that enable students to select into learning environments that meet their unique needs. For their part, districts should focus on helping students meet high academic expectations, rather than sweeping problems under the rug.

Lindsey M. Burke is the Will Skillman Fellow in education policy at the Heritage Foundation. This article was originally published on Fox News.