The race for the Orange 2 House seat features two fresh faces for the Statehouse.

Republican Zachary Lang and Democrat Monique Priestley, both of Bradford, are vying for the seat vacated by state Rep. Sarah Copeland Hanzas, D-Bradford, who is running instead for Vermont Secretary of State. In addition to Bradford, the district encompasses Fairlee and West Fairlee. Hanzas has represented the three towns for nearly 18 years.

Both Lang and Priestley have put economic development at the center of their platforms but differ along party lines when it comes to addressing the issue. 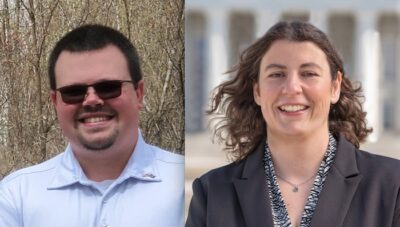 Priestley, who opened the Bradford coworking nonprofit The Space on Main in 2017, sees promise in “innovation spaces” and supporting smaller businesses in the area. She’d like to see the state fund building more coworking sites.

Priestley said she wants to see more grants and funding for microbusinesses — defined by the state as businesses with fewer than five employees and less than $250,000 in annual revenue. Those businesses are often small-scale service, retail, manufacturing or agricultural ventures.

The state Agency of Human Services offers one program to help people as long as they are at least 18 years old and fall below certain income levels. The program does not directly offer any money to recipients.

“There’s very few, very tiny microgrants every once in a while,” Priestley said, “[but] we can do more for microbusiness development funding.”

Asked how she would like to do that, she said with a chuckle, “I am still working on that.”

Lang offered scant details on some of his policy plans, too. The Bradford town firefighter and former Oxbow High School paraeducator declined to make himself available for an interview and only broadly answered a few questions via email.

His remarks during a 2020 run for the district suggest his economic priorities center on tax cuts.

“The increased tax burden that is causing Vermonters to flee to other states” is the biggest issue facing Vermont, he said in a 2020 forum with Copeland Hanzas. He proposed at the time looking at the overall budget “to cut in different places and programs. Not anything crazy, but I’m sure there’s money somewhere we can move around.”

During that forum he made clear that he wanted to avoid increasing taxes “at all costs.”

In the email earlier this month, Lang said he’s committed to collaborating with colleagues from all parties “to work on growing our existing businesses and farms, as well as trying to get more businesses up and running to bring money in.”

The increase in money circulating around the state “will ultimately help in reducing taxes,” he said.

But he did not describe how exactly he would favor growing businesses and how he would bring money into the state.