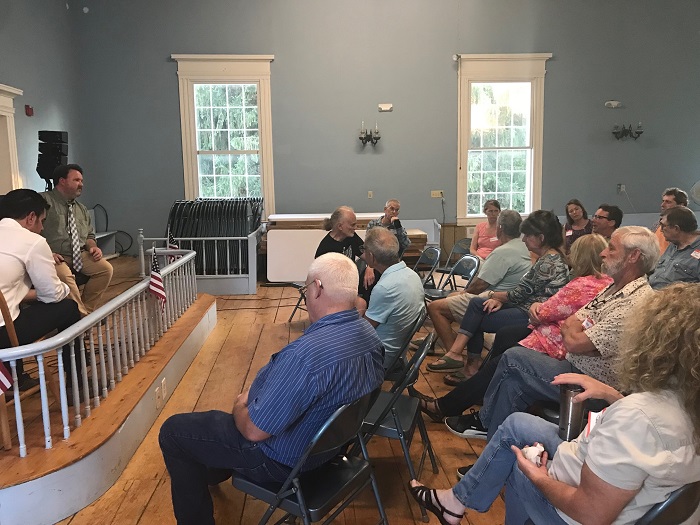 CALLING OUT RACISM: Vermonters at a town hall event Friday in Underhill were largely supportive of UVM professor Aaron Kindsvatter’s efforts to speak out against anti-white racism at schools and universities.

UNDERHILL, Vt. — University of Vermont professor Aaron Kindsvatter took to the stage this weekend to warn Vermonters that the education system at all age levels is being used to indoctrinate young minds into judging peers by the color of their skin.

This time the stage was a town hall meeting in Underhill, where more than 20 mostly supportive residents came to hear him speak and offer their questions.

Kindsvatter spent much of the evening warning that some social justice movements have abandoned the teachings of civil rights leaders who have said people should not judge others by their race. These social justice movements, he said, are instead indoctrinating students and staff members using critical race theory, which argues whites are oppressors and non-whites are victims.

“You would not believe what the future teachers are being taught in their college education,” Kindsvatter said. “There was recently a suggestion, that was taken seriously by many, that the university [should] base its education curriculum on Ibram X. Kendi’s book ‘Antiracist Baby.'”

According to political commentator Evelyn Rae, says that book teaches young children to “confess” their own racism.

Kindsvatter warned that such messages are being targeted at very young children.

“‘Antiracist Baby,’ which is a book that was meant to be read to pre-verbal children, that’s what the professors of education think that the next generation of teachers should be equipped with,” he said. ” … This is what teachers who are going to be coming into your elementary schools and your middle schools and your high schools are being taught.”

Later he talked about ongoing efforts to focus messages on race in education.

“Rather than building sort of a complex and nuanced sense of self that’s ready to cope in a pluralistic world, you have children who are learning to view themselves and others in terms of circumscribed, uncomplicated and un-nuanced identity markers, and this is the most unhealthy generation of young persons that we’ve ever seen,” he said.

Kindsvatter also shared his story about how a YouTube video he posted in March detailing campus racism against whites went viral. The clip has garnered strongly favorable ratings and comments from nearly 50,000 viewers.

Some in the audience asked why so many YouTube users support his message, while many locals have been critical, and some peers have called for his firing.

“Why would so many people be willing to support my video online? Probably because they could do it mostly anonymously,” Kindsvatter said. “And people are terribly, terribly afraid right now to speak out on this issue — and they have the right to be afraid. That doesn’t mean that you shouldn’t do it, but we are in an extremely grave situation right now.”

He also said that for those who are thinking about speaking out against racist rhetoric at their workplace, they should be “confident, but not arrogant,” and have like-minded people around for support.

Kindsvatter said while it’s right to investigate why blacks have a higher percentage of physical altercations with police than whites, it’s not helpful to label people racist.

“We don’t have to say ‘police suck,’ and we don’t have to say police are racists. We don’t need a moral judgement. What we do need is the ability to address those kinds of problems in a pro-human, objective manner, and that’s what universities are supposed to do.”