On May 27, 2010, Frank Rose, then a deputy assistant secretary in the U.S. State Department, made the following remarks at the 11th Royal United Services Institute for Defence and Security Studies (RUSI) Missile Defence Conference:

The United States strongly supports efforts to foster cooperation between NATO and Russia in the missile defense area, and we are working closely with our NATO allies and Russia to explore options to cooperate. Secretary of State Clinton noted this in her January 29th speech in Paris on the future of European security.

Later, in March 2012, at a nuclear security summit in Seoul, South Korea, where President Barack Obama had struggled to find common ground amid strong objections in Russia to the American plans for a missile defense system based in Europe, the president was overheard on an open microphone telling Russian President Dmitry Medvedev to pass the following sentiment on to Vladimir Putin: “This is my last election. After my election I have more flexibility … particularly with missile defense.” 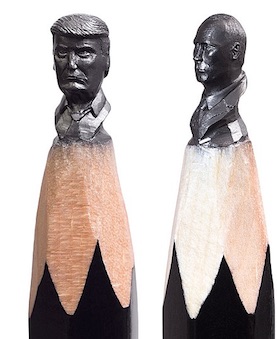 Eshelman: “Curiously, only now, since the improbable election of Donald Trump, has the U.S. political establishment’s sentiment on Russian activities suddenly reversed.”

Then, during the Oct. 22, 2012, presidential debate a couple of weeks before the election, Obama downplayed the Russian geopolitical threat when he said to Mitt Romney: “A few months ago when you were asked what’s the biggest geopolitical threat facing America, you said Russia, not Al Qaida; you said Russia … because, you know, the Cold War’s been over for 20 years.” Obama went on to chide Romney, saying: “You indicated that we shouldn’t be passing nuclear treaties with Russia despite the fact that 71 senators, Democrats and Republicans voted for it.”

In the process, millions of dollars were exchanged by Russian operatives for a 2010 Bill Clinton speech in Moscow to Renaissance Capital (a Russian finance corporation) and Uranium One’s chairman used his family foundation to make four donations totaling $2.35 million to the Clinton Foundation after Secretary of State Clinton (including the secretaries of the Treasury, State, Defense, Homeland Security, Commerce and Energy; the attorney general; and representatives from two White House offices — the United States Trade Representative and the Office of Science and Technology Policy) acquiesced to the June 8, 2010, Uranium One deal that gave Russia a financial interest in U.S. uranium production. Frank Giustra, a mining financier and Uranium One investor, donated $31.3 million to the foundation. Need I go on?

Billions of dollars in cash were provided by the Obama administration to Iran (a Russian ally) for a toothless nuclear disarmament deal. Syria’s Bashar al-Assad, another Russian ally, used poison gas despite a disaffected Obama “redline.’ And never mind the Bengazi charade, IRS meddling with conservative PACs, and a covert June 2016 meeting between Bill Clinton and Obama Attorney general Loretta Lynch after Hillary Clinton destroyed subpoenaed computer data — a clear obstruction of justice.

Curiously, only now, since the improbable election of Donald Trump, has the U.S. political establishment’s sentiment on Russian activities suddenly reversed. Evidently, there must have been a profound falling out between the U.S. political establishment and Russia somewhere along this line of events, even before Trump was nominated and later elected.

Why, after Trump’s improbable election win, are only Trump campaign associates being indicted by the U.S. political and judicial establishment?

“There is no honor among thieves” is a pithy saying that captured King Solomon’s observation concerning the wicked and those who choose their company. I suspect it will take another Judgment of Solomon to “split the baby” of government in two and either reveal the truth of this incestuous matter or kill the baby.