Attorney General William Barr has authorized federal prosecutors to “pursue substantial allegations” of voting irregularities, according to a leaked memo.

“I authorize you to pursue substantial allegations of voting and vote tabulation irregularities prior to the certification of elections in your jurisdictions in certain cases, as I have already done in specific instances,” Barr wrote in the memo. “Such inquiries and reviews may be conducted if there are clear and apparently credible allegations of irregularities that, if true, could potentially impact the outcome of a federal election in an individual State.”

The memo was reportedly sent to U.S. attorneys, assistant attorneys general for the criminal division, civil rights division, national security division, and the director of the FBI, the Epoch Times reported. 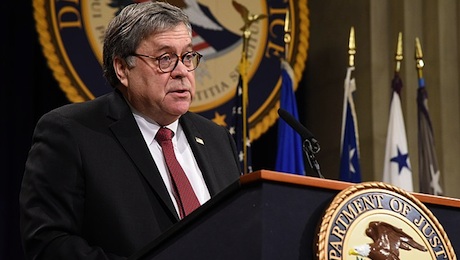 Of the claims, the Associated Press reported, “Attorney General William Barr has authorized federal prosecutors across the U.S. to pursue ‘substantial allegations’ of voting irregularities, if they exist, before the 2020 presidential election is certified, despite no evidence of widespread fraud.”

The memo warns DOJ personnel to “exercise appropriate caution” and “maintain the Department’s absolute commitment to fairness, neutrality, and non-partisanship.”

“You are the most senior leaders in the United States Department of Justice and I trust you to exercise great care and judgment in addressing allegations of voting and vote tabulation irregularities,” Barr wrote. “While serious allegations should be handled with great care, specious, speculative, fanciful or far-fetched claims should not be a basis for initiating federal inquiries.”

Barr says the purpose of the memo is to provide “authority and guidance to emphasize the need to timely and appropriately address allegations of voting irregularities so that all of the American people, regardless of their preferred candidate or party, can have full confidence in the results of our elections. The American people and the leaders they freely elect deserve nothing less.”

On Sept. 2, Barr told CNN that he was aware of several “very big” voter fraud investigations in multiple states related to mail-in ballots.

“This is playing with fire,” Barr said. “We’re a very closely divided country here and people have to have confidence in the results of the election and the legitimacy of the government. And people trying to change the rules to this methodology – which as a matter of logic is very open to fraud and coercion – is reckless and dangerous.”

“We have the tools and institutions we need to address any concerns,” McConnell, R-Kentucky, said. “The president has every right to look into allegations and request recounts under the law.”

24 thoughts on “U.S. Department of Justice to investigate voter fraud”